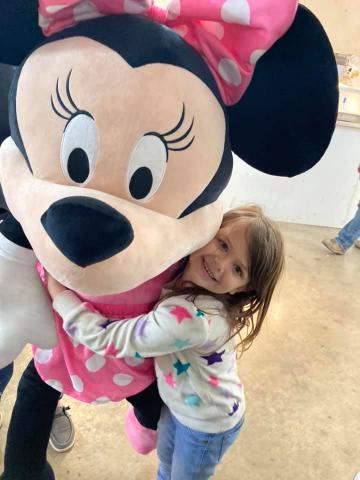 It all started with a trip to the races for Mitch Swinton. In 2005, he took his then-6-year-old-son Ross to the track in West Liberty and quickly realized there wasn’t much for kids to do. That’s when he decided to start the Lil’ Racer Car Club which is beginning its second season at the Benton County Speedway in Vinton. "I ran clubs at many different race tracks in Iowa over the previous 16 seasons. Maquoketa, Columbus Junction, West Liberty, Hawkeye Downs from 2009-2019, and now Vinton, on the invitation of the Dripps Family," he said.

On the club’s first night, it signed up five kids and gave away Easter eggs filled with candy. He thought it was going to be easy and 16 years later there are now more than 1,500 kids in the club,

His childhood wasn't the greatest and as he got older, Swinton struggled with alcohol. At one point he even lived on the streets of Minneapolis before going through treatment.

As he got his life together, he started college and that's where his life changed for the better. At the University of Iowa, he met the gal that would become his wife. Lori was cutting hair at the Old Capitol Mall and spotted Swinton who was sporting a huge head of hair in need of a haircut. She asked if she could cut it off for him. This Saturday, April 24 will mark the 37th anniversary, of their first date and it also marks the same amount of time since he had his last drink. He discovered that he could have fun without it. Oh, and he married Lori later that same year.

Swinton a resident of Lone Tree and a member of the city council there. However, he spends a lot of his time helping kids have a childhood that he didn't have. He said that he started the club for himself, but more for the kids. He enjoys seeing the children having fun and winning trophies and prizes. It's all for them.

Swinton had spinal surgery a couple of months ago and now relies on his helpers, Rachel and Alyssa Baugh, Kylie Meskimen, and Shelby Reck. They are available to help sign kids up and run the booth.

Swinton plans to keep running the club as long as he can. “We do what we can do with limited funds,” Swinton said. He'd like to find that national sponsor to do what he does but is also happy to line up a string of sponsors to do what they do. "The smiles on the kids’ face is worth a million dollars to me," he said.

"The Lil Racer Car Club is happy to begin our second season at the track!" Swinton said. "Sunday we registered 81 members, who received a Lil Racer permit and were provided free club shirts."
The winner of the five-foot-tall Mickey Mouse Giveaway this week was Bentley Price of Vinton.
The five-foot-tall Minnie Mouse went home with Adelida Pierson of Vinton.
"Lil Racer of the Week" was Paizley, daughter of Stephanie and Jimmy Graham of Winthrop IA. who is 6 years old and was awarded a three-foot-tall trophy to take home with her.
You can follow the club on their Facebook page. Bring the kids out for some fun! And by all means, if your company can help to sponsor the club, talk to Mitch.
Next Week's Activity is "Grandparents Night " Kids are invited to bring their grandparents to the track and introduce them to the Lil Racer Clubhouse staff. The grandparents then become eligible to win one of four grocery store gift cards from area Vinton grocery stores.