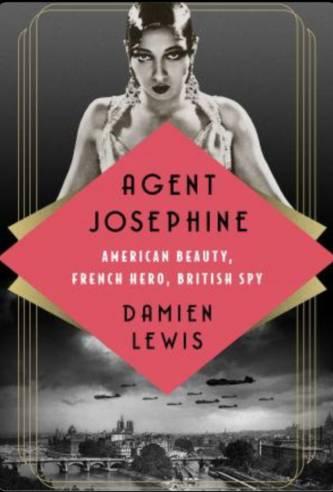 Agent Josephine By Damien Lewis Adult Non-Fiction Biography Reviewed by Connie Bennett In a radical departure from my usual choices, this book is not only non-fiction, but also a biography. The setting is primarily France, during the years of World War II, and the subject is Josephine Baker. I had not heard of this multi-talented woman, nor of her place in history until now. Born Freda McDonald in St. Louis, Missouri, on June 3rd, 1906, she suffered abject poverty, and was mercilessly teased, mocked and ridiculed. To escape the taunting, bigotry and racism, Freda changed her name to Josephine (her middle name), moved to Paris and promptly adopted the city as her own. Leaving Paris to tour other European cities, she "thrilled to the wild excess of Berlin" and played to sold-out houses. Soon, she was the highest-paid female celebrity in Europe, known not only for her beauty, and her exceptional singing and dancing, but also for her near-naked performances which earned her the condemnation of the Nazis. In Austria, she was escorted by armed guards, and greeted with calls of "Black Devil" and "Jezebel". Josephine married a wealthy Jewish industrialist, which made her doubly the target of Hitler. Kristallnacht served as the impetus she needed to declare herself willing to kill with her own hands, "if the need arose." This book is deep, but discusses in detail the Second World War, as well as some of the main characters of that time. Ten years in the researching and writing, the book is not an easy read, but for history buffs, it will enlighten you further about the well-known Josephine Baker, entertainer, but also, the fearless spy for the Allies, whose work at the time was largely unknown. The author states, "...she was not only a...superstar... but she was also a 'world- class spy'... during the war years." Agent Josephine will no doubt have detractors, but for those who read for knowledge as well as entertainment, this book will be a oft-quoted favorite. Published 2022 Hachette Book Group New York, NY

Stop in to visit at your library or check in online HERE!