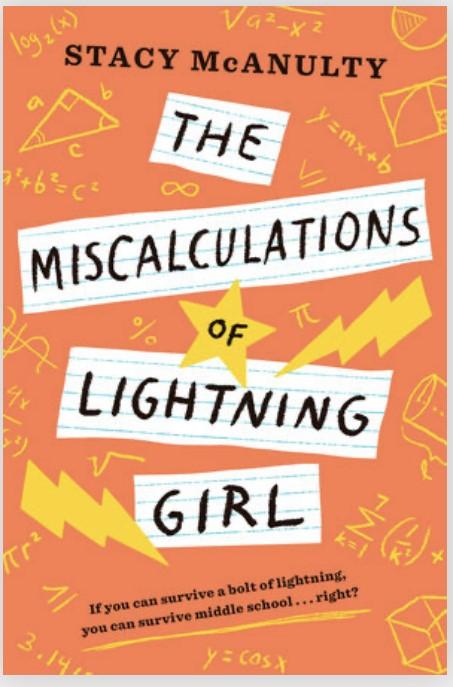 The Miscalculations of Lightning Girl By Stacy McAnulty

Reviews by Connie Bennett & Isabel Silver This book was highly recommended to me by a young friend, Isabel Silver, who told me it was "very, very good, and be sure to tell them that!" Ever obedient, I have complied. Although it is fiction, this story reads like it could have actually occurred, today! Lucy is a young math genius who gained her powers when she was struck by lightning at a very early age. She has been homeschooled for her entire school career. Now, as if the teen years weren't already fraught with drama and emotions, her grandmother places her in a public middle school. At age twelve, this shy young girl is plagued with, among other peculiarities, Obsessive Compulsive Disorder, which causes her to clean everything, incessantly. At first nicknamed "Lightning Girl" for her impossibly fast math calculations, which are always correct (because she's a genius), she now carries the tag of "The Cleaning Lady." Thrown into the mix is her fear of dogs, caused by her OCD and their dirtiness, and an ownerless dog. Can anything good come of this? At the advice of my young co-reviewer, I'll leave you there. Now, go read the book! Published May 1, 2018 By Random House Books For Young Readers