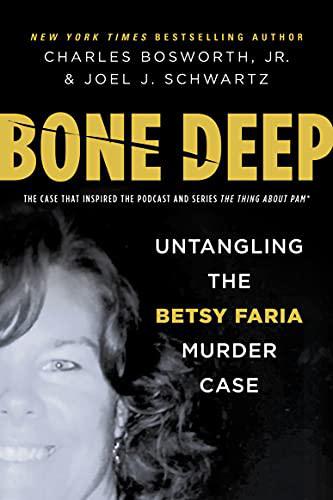 Bone Deep By Charles Bosworth, Jr. and Joel J. Schwartz, DA Adult Non-Fiction True Crime/ Murder Mystery Reviewed by Connie Bennett Because this is a true story, told by the participants, we can't change the storyline, the characters, or the outcome. Including the members of several families, the entire prosecution and defense teams, and many members of the Police Departments and the FBI, there are almost too many people to keep track of. Add to that the amount of evidence and conflicting testimony, and one cannot really say that the book was an easy read, nor was it particularly enjoyable. However, for those of us who remember this event and the ensuing miscarriage of justice, it does give a satisfying sense of closure. When I finally finished, after many aborted attempts, I have to say that this was really a psychological thriller! A man comes home from his Tuesday evening "game night" with friends, to find his wife dead on the living room floor, brutally slashed and stabbed sixty-five times. Of course, he is the prime suspect. But, did he do it? (No, the butler didn't do it, either, and there wasn't a one-armed man in sight.) After many a twist and turn, all is revealed, and it is truly unbelievable! You just can't miss out on this one! This true crime thriller is available at the Vinton Public Library, which has two copies of the book. It can also be read in ebook or audiobook format through Hoopla. Contact the library for more details. Published Mar. 2022 By Citadel Press NY