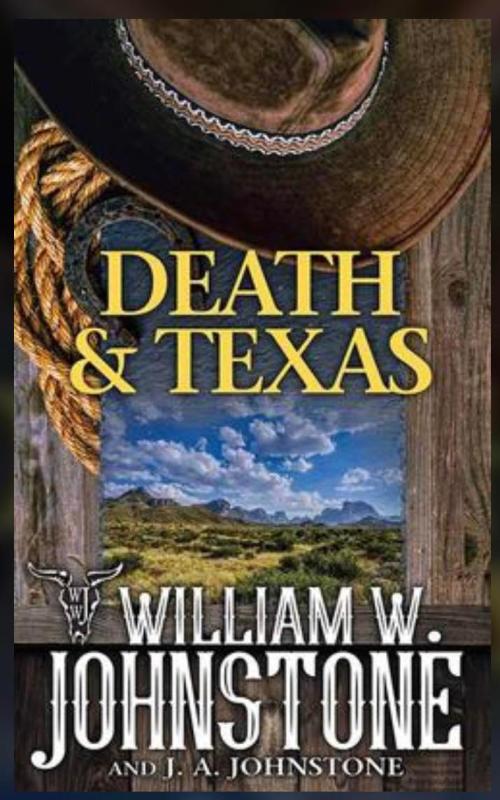 Death & Texas By Wm. W. Johnstone and J.A. Johnstone Large Print Western Fiction Reviewed by Connie Bennett Since tax season will soon be upon us, I thought it appropriate to review a book with a title that is a play on the phrase "death and taxes". So, saddle up, Ya'll! It's time for another Western from the hugely popular Johnstone family; "Death and TEXAS." Cullen McCabe is a former lawman on a mission of vengeance. Once happily married with two small children, Cullen was deprived of his family, as well as his home, when an evil gang of five men kill his wife and children and burn his home to the ground. The story opens as McCabe closes in on the fifth guilty man, and, upon the outlaw's confession, hangs him from the rafters of the cabin in which he was holed up. In this way, the gang was captured, one by one, their confessions heard, and their punishment carried out as required by law. Sickened by the death of his loved ones, as well as the executions, McCabe decides to travel some distance from his former home and build a cabin in which to recover. Before this is accomplished, however, he receives a summons from the Governor of Texas, requesting his presence at the state Capitol. In due course, he is commissioned as a secret agent for the Governor, and given an assignment that will lead to the betterment of the entire state. There are a few rabbit trails to follow in the course of the book, but it was, as usual, a well-written western by an accomplished and popular writing team. I enjoyed this one, and I think you will, too! Hunker down and read it soon! This book is available from the Vinton Public Library, and also as an ebook from Hoopla. Published 2019 Kensington Pub. Corp. New York, N.Y.