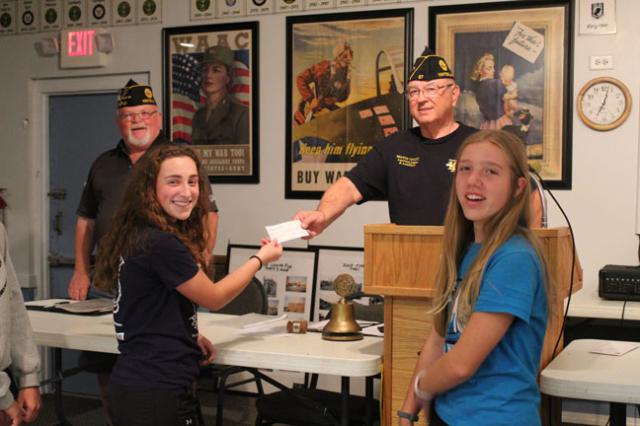 On behalf of the North Eden Willing Workers, Kate Hyland presents a check to the local Legion Post

The North Eden Willing Workers have been in charge of the garbage pick up at the fairgrounds during the fair the last several years. As part of a thank you for taking on this task, they receive all money from the cans that they pick up at the fair. This year due to new regulations with club money, the club unanimously voted to turn all money collected in cans over to the American Legion.

I am very proud of these kids. As a leader, we are trying to instill the importance of giving back to the community. In the spring our club plants flowers for the Lutheran Home and Windsor Manor, we do the garbage pick up for the Fairgrounds during a very busy time in our 4-H lives, and in December we do caroling downtown and at Windsor Manor. These are just the annual things we do besides special projects each year. I thought this was a great idea to help out the Legion that they came up with, especially with the recent hardship they had undergone. The place looks great and we are honored to give back to them as I know they still have things they want to do. leader Tressa Walton said.

The club would also like to thank BEHIP who donated their cans from the shift they helped with to the Legion as well as all those at the fair who made sure to put their cans in a recycling container to help out the club!