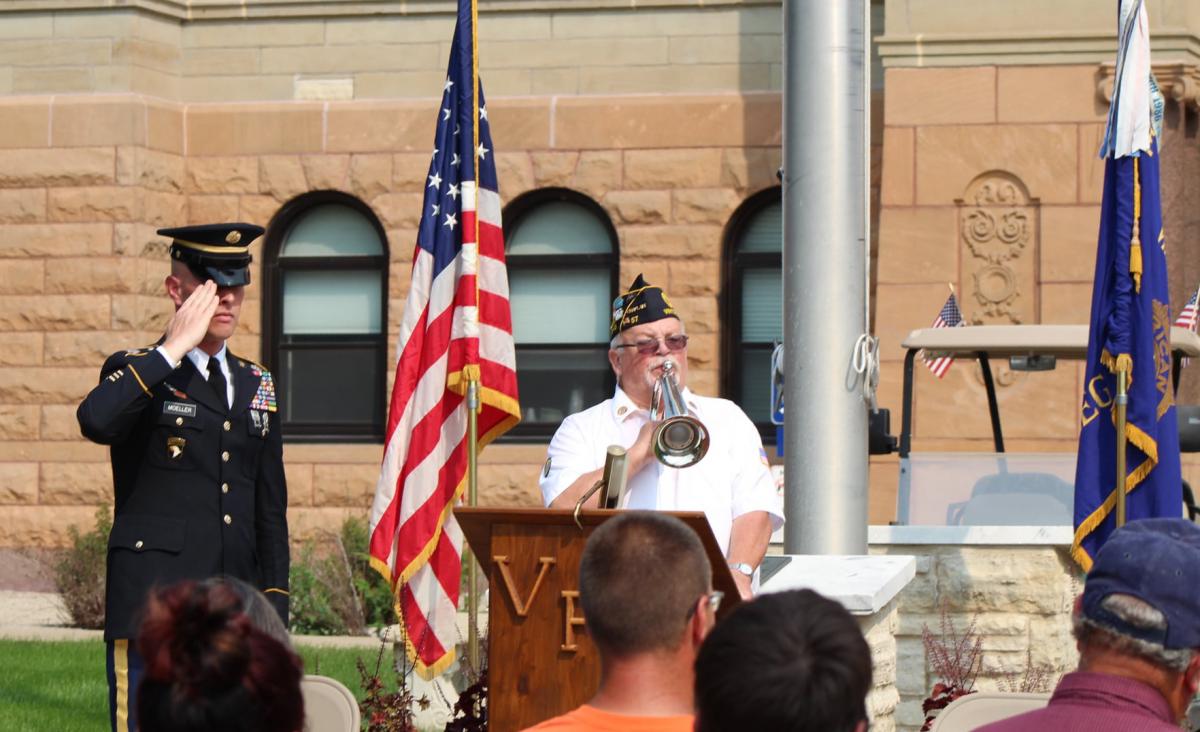 One of the darkest days in American history was remembered 20 years later on Saturday, September 11, 2021. With around 100 residents gathered on the south side of the courthouse, the local American Legion George G. Luckey Post conducted a service to honor those who were lost in the attacks on September 11, 2001.

Most in the crowd shared with each other where they were when the attacks happened. It is one of those memories you have that is etched in your memory as you realized for the first time in your lives America was under attack. Some talked about flying or having loved ones in the air and being worried for their safety. Others talked about being at work or getting ready to head to work at the time of the attacks.

"Today we honor the victims and families of more than 3,000 people who were killed in the terrorist attacks. We also honor those who through their selfless service portray the values and ideals on which this country was founded.

Those who supported the recovery efforts in New York, Pennsylvania, and Washington D.C. Many of these individuals were Iowans and some were from this community. We will never forget the planes crashing into the World Trade Centers twin towers or the Pentagon burning. Nor should we. We remember the smoke, the rubble, and the victim's tears.

But we also remember the heroes, uniformed and civilians. The Firefighters and police officers who rushed into burning buildings to save people trapped inside. The heroic passengers on Flight 93 who fought to retake their plane that later crashed near Shanksville, Pennsylvania in an effort to save innocent lives.

I am here to ask a fundamental question of each and every one of you. What impact did this situation have on you? I ask that you ponder on that question. Because for many this situation brought anger, it facilitated love for those close to them, it developed a sense of nationalism or a multitude of other actions and emotions.

It's important for each of you to reflect on those reactions of 9/11, to educate and enlighten your present and future. Did you grow from it? Did your lessons bring benefit to others? Was your experience important to those who did not experience this tragedy?

I was asked here today to impart my experiences with 9/11 and the impact on my path. I was 17 years old when I enlisted in the military. It was a quiet time in our country. We were worried more about what our computers were going to do at the turn of the century, than what potential adversaries would need to be conquered.

I joined under the premise of a sense of nationalism. I felt that I should at least contribute to the good of the nation, at least one short time. Almost 13 months to the day of my enlistment, this tragic event occurred.

As a young man and a Private at that, I had no sense of reality. What was to happen to me? Was our livelihood at stake? Regardless, I knew one thing. I was in the right position to be a solution, not a problem.

9/11 drove me to two deployments as a medic in Iraq and Afghanistan. where yet more lives were lost. It turned into Military Funeral Honors and Casualty Operations in later years. When I tell people what I do, their eyes widen when I tell them that I love my job. I do just that.

I present flags to loved ones at funerals, I work with families to arrange matters after the death of a soldier. And yes, I knock on the door at random hours, and some of my first words are, "Sir, the Secretary of the Army has asked me to regretfully inform you, that your son has died as a direct result of an IED strike in Jalalabad, Afghanistan." I'll stop at that, but hopefully, the power of that statement sinks in.

What does all of this have to do with 9/11? It's the impact that it had on my life. To me, the events of that day will always be a part of me. It steered how I approach life, and the lives of others. It taught me compassion. It taught me that others have struggles that I will never be able to comprehend.

It taught me to take care of others at their greatest time of need. But that's where the question I asked earlier comes into play for this audience. It's been 20 years since that day. 20 years later, what impact did 9/11 have on you? And if it didn't, could it? Could you become just a little better of a person? Could we become just a little better as a community or society? Could we take those sacrifices they made to improve the lives of others? Spending a career in the life of service, I believe we can always be in service to others.

We do not forget the innocent people who lost their lives on that day. Each person who died or was impacted was a friend, a family member, a coworker. Do not forget those who have spent the last 20 years in armed conflict as a result of this tragedy. Do not forget the thousands of American service members who have paid the ultimate sacrifice in the fight against terrorism.

Lastly, don't forget the more than 3,000 people who died on that day. All of these people gave their tomorrow, so we could have our today."

Following Mueller's speech, the Vinton Fire Department rang the bell on their hand-drawn fire engine as part of the memorial and the last call honoring those service members lost on that day. The Legion also gave a 21 gun salute to close the ceremony followed by the playing of Taps.

Thank you to both the local George G. Luckey Legion Post for organizing the service and the Shellsburg Legion Riders who stood quietly respectfully holding American Flags for the ceremony. Thank you to our Vinton Fire Department as well for all of their efforts to make this ceremony a memorable service. Thank you also to Sergeant Major Pete Mueller for making the trip to share his experiences.