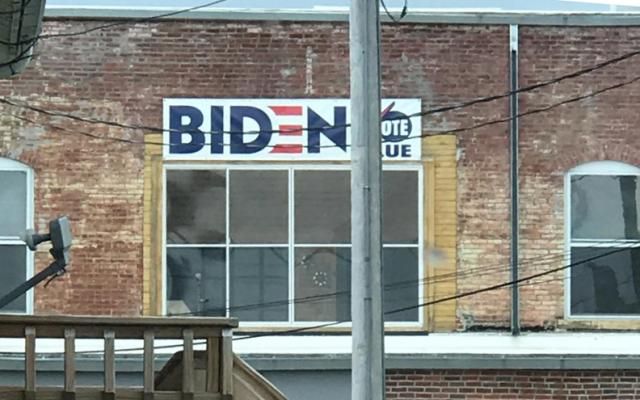 The other day I made a rare trip to the grocery store. Hey, I ran out of milk and while the place used to be packed to the gills, I opted to spend a little more at the gas stations rather than wade into a sea of bodies for half a gallon of milk, I'm weird that way.

So anyway, since the store looked relatively normal for traffic so I took a leisurely stroll through. Halfway through I'm thinking, "Crud I just stood in the rain to take pictures I probably look like a drowned rat!" So then the leisurely trip sped up a bit.

Since I never cook I grabbed some frozen meals and some raspberries because they were on sale, and then I grabbed a box of cereal thinking raspberries go great on cereal and THEN I grabbed the milk. Oh and chocolate, I HAVE to have chocolate.

I grabbed my two bags of groceries and went to the car. Minding my own business, a pretty uneventful trip to the store.

Plopping my bags in the backseat, fastening my seatbelt, and driving out of the parking lot, I see it.

I grinned. Then I busted out laughing.

Because of all of the pandemic hysteria, the fact that there will be an actual election in June had temporarily fallen off my radar. Sure, I enjoy batting around all of the effects of this pandemic and the calls that the government is making and the results, which might make for another article, but I had forgotten that there was an actual election happening, temporarily.

I don't know WHY I laughed. Maybe I'm just weird that way. Maybe it was the huge banner in the small town that hit my funny bone.

Maybe it was the location. Maybe it was because the "vote blue" was obstructed by a light pole so it looked like it said, "Vote Lue." In a nano second, it took me back to a line in a movie called, "It takes Two" with the Olson twins, Kirstie Alley and Steve Guttenberg. One of my all-time favorite movies, it's a newer Parent Trap. There is a line in the movie where Kirstie Alley asks, "Lou who?" So of course, when I saw, "Vote 'lue'" I said, "Lou who?"

Of course, maybe I chuckled because a couple of my favorite people live there and I was a bit jealous that I've never been able to do what they were doing, well, I could have but because of this career people go crazy if you "fly your flag."

It triggered a memory of the time we had 3 car seats in the back of our Grand Marquis and had plates on the back that said, "IM4LIFE." I mean duh. As a result, there was a meeting where the hasband was called to defend that. After all, the hasband was supposedly biased because of the plates on the car. So ever since then, it was made clear that because of this occupation any sort of political anything was taboo.

That was 30 years ago when the media at least attempted to act like they were unbiased. Now it's the TOT channel, it doesn't matter which one you turn on, it's the Take Out Trump channel. So yeah, to even think that media isn't biased is again, laughable, I get the irony of this sentence.

So that brings me back to the sign, er banner.

I don't know, maybe I'll get brave and wear my colors. I kind of thought it was obvious already, but when I get in trouble for being biased in the opposite direction that also makes me chuckle.

To me, it's like a sports season. Whether your team is Red or Blue, wear your colors with pride. Go ahead and put up a banner on the wall. HOPEFULLY, people who agree will cheer and those that might not, well hopefully they don't get angry and will just chuckle.

Whether I agree or disagree, it makes my heart swell just a little bit when I realize that the country we live in is free, and we can say and do what we want.

Well, that was until COVID-19 arrived, and now that's up for discussion.

Next Opinion Article
Laugh with Kathy: You can write