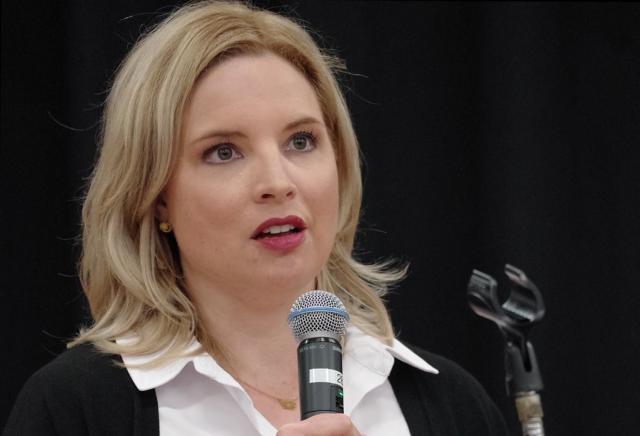 Congresswoman Ashley Hinson stopped in Vinton on Tuesday morning. She spoke at the Vinton-Shellsburg High School. Addressing the crowd she updated attendees on the happenings in Washington D.C.

She then took questions from residents of Vinton and from the Cedar Rapids area. Addressing topics concerning voting against the investigation into the January 6th incident at the capitol. She explained that on January 12th, 6 days later, she had proposed an investigation into the incident but it was rejected. By the time the Speaker of the House, Nancy Pelosi brought it to the floor for a vote, the Federal Bureau of Investigation, as well as other federal agencies were already investigating with over 400 charged, so she felt there was to point in setting up yet another investigation.

She answered questions about certifying the election, explaining that it's up to the states and she supports that decision. She also shared her thoughts on free college. When asked, she feels that if you want to attend college, you should have some skin in the game. Explaining that there are still Pell Grants available to help with the cost but doesn't feel that it's right to burden everyone else with the cost.

Another problem in Washington D.C. is the ability to attach several topics to one bill which creates multiple laws with varying topics. She explained that this was the problem with one bill that she did not support which included laws protecting doctors. The other things attached to the bill made it something that she couldn't sign on to.

The topic of Teresa Green comparing mask-wearing to the beginning stages of the holocaust was also addressed and Hinson spoke strongly in opposition stating that there was no comparison.

She also spent time explaining the local government's responsibilities and directing those in attendance to address some of their questions to local Supervisors and elected state officials explaining that some issues she can't address. The solar farm was one of those issues that are left to local officials.

Area midwife and Vinton Council Member Bethany Gates addressed the bill that Hinson sponsored. She commended the Congresswoman for cosponsoring the Midwives for Moms Act, and the BABIES Act. The first bill incentivizes midwives to work in counties like Benton County that is considered a 'maternal-fetal healthcare desert' and creates additional funding for CPM and CNM students who agree to work in these areas. The second bill incentivizes the building of freestanding birth centers.

Hinson explained that getting states to address the issue included educating legislators of the need and the benefits of midwives to the health of moms and babies. Restating that constituents need to address the representatives of their need.
After leaving Vinton Hinson made two additional stops in neighboring counties.

Norma Gould May 26, 2021, 8:28 pm Did you know that Ms. Hinson along with Rep McClintock of California have proposed an amendment to the constitution H.J.Res. 42 that a new state may only be admitted to the Union upon a two-thirds vote of both houses of Congress. Now what brought this on is D.C. wanting to become a state and since it is predominately black and since republicans believe black people vote for Democrats this is their way of keeping them from becoming a state so they don't have a chance to vote for the Democrats. Pretty mean and nasty way to discriminate in my opinion.
Fred Stutsman May 27, 2021, 7:11 pm OR the constitution says that D.C. cannot become a state... https://www.msn.com/en-us/news/elections-2020/the-constitution-says-no-to-dc-statehood/ar-BB15MkiW
Norma Gould May 28, 2021, 10:36 am Fred, Because of the way the Republicans are passing so many voter suppression laws all over the country, even in Iowa, I don't believe they will be doing their part to represent the people of D.C. as the article stated they would. It is a proven fact they are doing their best to keep black and brown people from voting so they are not going to care one way or another about representing them. As far as the founding fathers saying they shouldn't become a state, don't forget this is 2021. Things do change. As Rachel Maddow of MSNBC always says "Watch what they do, not what they say." The republicans have become the biggest liars in the country. I guess trump was their teacher and he taught them well. Norma Gould
advertiser content