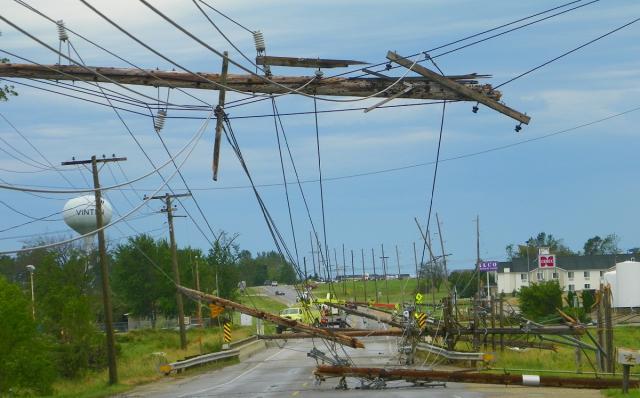 Utility poles snapped during the storm. Just a bit of the damage on Hwy 218 on the west edge of town 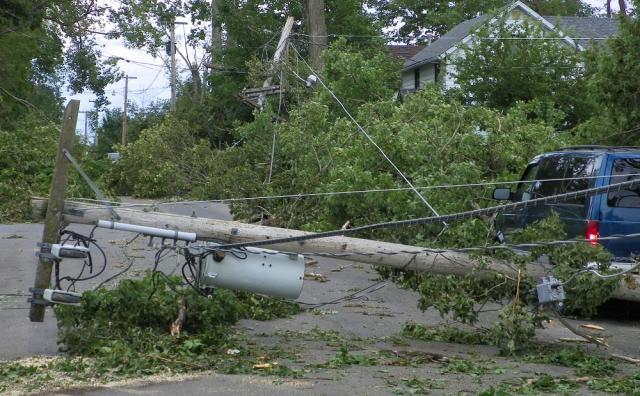 Sunday marked the 10th anniversary of the straight-line winds that ripped through the area on July 11, 2011. The National Weather Service said that the area was subject to138 miles per hour winds for nearly 30 minutes. (Click to see how the radar showed this storm)
Some of the stories put out following the storm included these kinds of updates because this WAS news following the storm's arrival.4:34 p.m on July 11.

Power is restored in most of downtown. The laundromat is up and running!

There will be a movie tonight, X-Men: First Class. The Palace has power AND AIR CONDITIONING!!

The 4th Street Diner is open 8-5 m-f and is serving meals, also has air!

Cameron's block appears to still be without power.

Some damage has been done to the courthouse roof, inside is fine.

Fair is to go on as scheduled, midway appears to be set up, as usual, hog showing will be limited, they won't be able to stay all week as there is too much damage. Hogs will be brought in, shown, and taken home.

Horse barn: the horse show will still be held there.

The Cobblestone Inn and Suites is open.

54 people received help from the Red Cross, they are at the Vinton-Shellsburg High School, 22 people spent the night. They have meals available, breakfast, lunch, and supper at 5:30 pm for those of you needing it....donations are not needed at this time, if you want to donate, NO INJURIES REPORTED!!!!!

Chainsaws didn't stop, neighbors helping neighbors was of course the norm in this city.

Ian Sallee shared his memory of that day. "It was early in the morning, but most likely we were woken up abruptly by an approaching storm producing insane wind gusts with it, causing lots of damage in its path. This thing rapidly approached the town of Vinton, and probably not one home didn't have damage. Trees/limbs/branches down, power lines down, you'd think a tornado came through. This was not the case. This was the Derecho Of 2011 that hit the country HARD!!!! and Vinton even harder!I was woken up by the sound of a ringing cell phone...then mom heard a loud THUD outside and we all quickly ran for cover! I thought there was a tornado. The wind wooshed outside. The lightning was constant. The thunder was really loud, and in all that, trees, power lines, homes, and other outside things were getting badly damaged.A while after the storm passed, we all went outside as dad had gotten home from work. Damage was everywhere to be seen. I was still not convinced that a tornado didn't just hit, but this was when I was shown the new term that I'd never (and probably most people) had never heard before: Derecho.The power was out for days for some, a week or two for others who didn't have a generator. It was just an unbelievable experience for all of us."July and August seem to be some of the worst times of the year in our area.At the same time, just 5 years and a week later we had a tornado hit Vinton, Last year in August another Derecho came through sparing Vinton the brunt of the storm but wiping out everything in the county south of here.One of the headlines completely underestimated the strength Vinton. It read, "Total recovery from storm will take decades." Some things were never the same, like the smokestacks that were brought down at the hospital, and all of the trees that can't be regrown in a decade. But overall, in less than a decade we're back and we've been back.
10 years ago, Garrison's Emergency Services building was flattened, today it's back, that was one of the most devastating sights.Having lived in other cities in Iowa, there is a different feel about Vinton than in those places. When something like this hit in Vinton, you just KNOW that everyone pitches in until the job is done. Complete strangers arrived at several locations with chainsaws and pickup trucks to help our elderly folks who couldn't clear their yards. Kids and teenagers worked alongside their parents and grandparents to clear farms. It was a lot of work, but we did what needed to be done.I hate to say something like, "here's to a quiet year/decade" because that would probably jinx it. But to all of the area residents that were here, you did well, you made Vinton look like Vinton again.
Residents clearing trees, assessing damage

Kim Betts September 7, 2021, 11:40 am Lost 47 acres of timber that day. Lots of damage. I cleaned it all up on my own. No National Guard. No nationwide coverage.
advertiser content