Entertainment : In Depth: Shang Chi and the Legend of the Rings 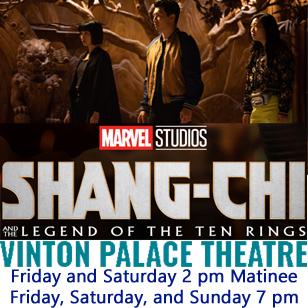 "Shang Chi and the Legend of the Rings" opens Friday, September 24, and plays in our regular weekend schedule, Friday and Saturday, 2 pm and 7 pm, and Sunday at 7 pm. "Shang Chi" is rated PG-13 and runs 132 minutes.

Marvel fans rejoice! Many say this is the best of the series. Indeed, Rotten Tomatoes rates it a FRESH 92% from critics and a resounding 98% from audiences. Wow!

From our booker, Frank: "'Shang Chi: The Legend of the Ten Rings' fits nicely into the Marvel Universe. As with past Marvel films, there is a perfect balance of action, adventure, comedy and drama. Be sure to watch the credits. The film also seamlessly picks up where the last Avengers left off and cleverly connects with the very first film in the series, 'Iron Man.' Remember when Tony Stark was captured and imprisoned in a cave by a terrorist group called the Ten Rings?"

You have two chances to watch this one! "Legend of the Ten Rings" also plays the Palace October 1 - 3. I don't know about you, but I'll be watching it twice!

Other October news: Chili dogs and homemade chili in the concession stand! And "No Time to Die" on its release date, October 8, followed by "The Addams Family 2" and "Venom: Let There Be Carnage" for Halloween.

See you at the movies!