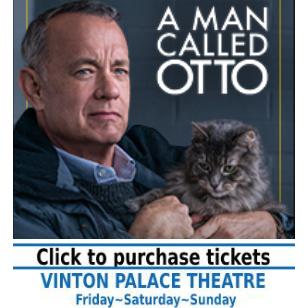 Otto (Tom Hanks) is a grumpy isolated widower with staunch principles, strict routines and a short fuse, who gives everyone in his neighborhood a hard time as he watches over it like a hawk. Just as it seems like he's finally given up on life, an unlikely and reluctant friendship develops with his new neighbors.

Little by little, Otto undergoes a subtle transformation... but is he really capable of change?

The film will be directed by Marc Forster. Two-time Oscar nominee David Magee is adapting the screenplay from Fredrik Backman's 1# New York Times Bestseller "A Man Called Ove" - with the titular character being renamed to reflect the shift to an American setting. Fredrik Wikstrm Nicastro, Rita Wilson, Tom Hanks and Gary Goetzman are producing. Marc Forster, Rene Wolfe and David Magee will serve as executive producers.

To see information about a book/movie discussion at the Vinton Public Library HERE!

To book a ticket at the Vinton Palace Theatre, click HERE!

Previous Entertainment Article
Showing tonight only at the Palace: Misery