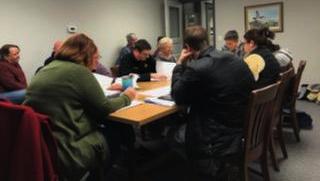 Last Wednesday night the Vinton Public Library Board called a special meeting before presenting their budget to the City Council.

In the previous meeting, the board had worked to put together a budget. A motion had been made to cap the new library director's salary at $80,000 for the upcoming fiscal year. Wednesday night there was the belief that the motion had been to grant this amount in addition to benefits. This, however, was not the case.

Now, months later, Board Member Erin Monaghan felt that board chair Mr. Jimmy Kelly had made negotiations for the benefits package without making the board aware of these decisions. The board, of course, had an opportunity to ask any additional questions before voting to make the hiring but apparently failed to do so. She said that if the board had understood the cost of the benefits package, the wage discussion would have been different at the last meeting.

During the time of the hiring, keeping the library functioning was a top priority. The board was filling in at the library while trying to find candidates for the new position. Mr. Kelly had also taken on many of the director's jobs to keep the library doors open. At several of the meetings, he mentioned the need to confirm with Chris Ward, the City Administrator about the different aspects of the hiring process which included discussing benefits packages. Unofficially, the board had given their blessing for him to hold these discussions. Many of the members were still not familiar with what is included in the benefits package and Ward explained that it varies for different city employees.

Benefits that the library has to cover include FICA, IPERS, Medicare and other employee benefits. Ward said that these numbers are already set and that there was only a slight change in the library budget from this. There was some negotiation of healthcare benefits, family vs. single plan for Mrs. Henkle. Mr. Kelly was under the impression that the city aka Ward was the one that approves that but Ward clarified that it is up to the board to decide on some of the benefits. Ward went on to explain that the question posed to him was whether or not it could be done, and he said that in the past it had been done, with the numbers in the budget. Mr. Kelly thought he meant that it was something that was approved by the city rather than still needing to be approved by the board, apparently no questions were asked on the matter by the board. It was said that Mr. Kelly had not shared all of the details of the benefits, but it is not clear if the board had asked before granting the benefit package.

There was more discussion on how insurance fees work for city employees. If the board should choose the $80,000 and the current benefits package it would bring the final income for Mrs. Henkel above $100,000 annually.

There were other concerns presented by Monaghan at the meeting which included alleged meetings that the board had with Friends of the Library she said without properly posting the meetings. Members are not supposed to stay for such a meeting, but apparently, they did rather than recognizing the oversight and simply leaving.

She also cited transparency issues in not relaying information to the complete board including one that she called a "lawsuit" for surveillance camera footage, (this was not a lawsuit but a Freedom of Information request by Vinton Today sent to Mr. Kelly and not the whole board).

Monaghan said there was a long list of other complaints, but they were not named.

Schedules had to be made, volunteers lined up, he took over many of the director's responsibilities as well as coordinated with the City Administrator and board on all of the details of hiring and the pressure was intense for him. He apologized several times for any mistakes in communication and promised to attempt to do better.

Others on the board chimed in with their support of Mr. Kelly and asked what the resolution should be. Without a definite plan, the suggestion was to have more communication with the board.

Ward, was asked to explained how the library's proposed budget is presented to the City Council. He explained that a figure is presented for the library to the council during January. The city then has an idea of the needs for each city department.

The individual line items in the library budget. including salaries, will not need to be finalized right now. Ward explained in simple terms that budgets work like a port. "It's like ships," he said. (the library, street department, water department, parks, and rec, etc.=ships) The ships pull into the port, and collect their "shipment" of funds. (Editor's words next) In a sense, the city wishes them Bon Voyage and leaves the decision of handling the money up to each board.

The meeting adjourned and prepared to present their budget to the city council the following day which they did.