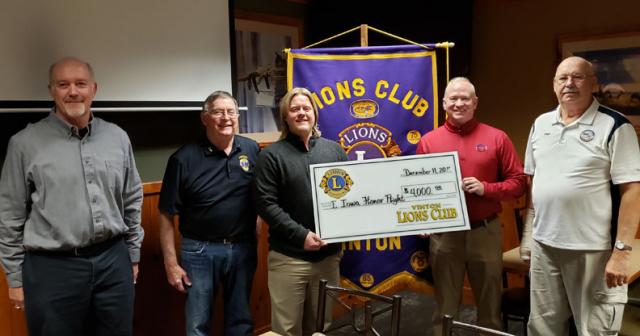 Every November, with the assistance of local Boy Scout troop 47, the fire department and Fareway the Lions Club has a chili supper on the same evening as the Holiday Parade that kicks off the Christmas season in Vinton.The club raised $4,000 that was donated to support the Eastern Iowa Honor Flight.

The Honor Flight Network is a national network that is comprised of 140 "hubs", one of which is the Eastern Iowa Honor Flight. The mission of Honor Flight, which started nationally in 2005, is to take veterans to Washington DC to visit the memorials dedicated to honoring those who have served and sacrificed for our country. The Eastern Iowa Honor Flight program has been flying veterans to DC for the last 10 years. To date they have sponsored 38 flights and flown 3435 veterans. Last year they were able to fly 385 veterans to Washington DC. Nationally, nearly a quarter-million veterans have been to Washington DC on an Honor Flight. Honor Flight is now escorting WWII, Korean era, Vietnam era, and terminally ill veterans of any era to see their memorials in Washington. All veterans are encouraged to apply - Army, Navy, Marines, Air Force, Coast Guard, Reserves, and National Guard veterans serving during war or peace time, serving overseas or stateside. Even if you did not serve in combat you are still eligible to apply. Their mission is to take every veteran who applies, but please only apply once because applications are kept on file.

The Eastern Iowa Honor Flight accepts applications from veterans in Benton, Iowa, Jasper, Jones, Johnson, Linn, Marshall, South Tama, Powesheik and Washington counties. Veterans from surrounding areas are welcome if they are able to fly from the Eastern Iowa Airport in Cedar Rapids.

All flights depart the Eastern Iowa Airport at 7:00 a.m., and return to Cedar Rapids between 8:30 and 9:00 p.m. Families are encouraged to join the Welcome Home Celebration to honor their favorite veterans as they return home and share stories they have to tell of the trip. As Will Rogers said, "We can't all be heroes. Some of us have to stand on the curb and clap as they walk by". It's truly an emotional event to participate in a welcome home ceremony. While we may not all be heroes, the veterans who fly to Washington DC on an Honor Flight certainly are. Thank you for your service! Thanks to those of you who have donated to Eastern Iowa Honor Flight at our chili supper and elsewhere to help make it possible.

2020 flight dates are scheduled for April, May, September, and October. Lions Club member Roger Uthoff has worked very hard with Eastern Iowa Honor Flight and Eastern Iowa Veterans. He is the point of contact if you want more information or you can go to their website at eihonorflight.org.

Thanks for supporting Eastern Iowa Honor flight and our nation's veterans through your donation at the Lion's chili supper. We hope to make next year's supper and Honor Flight even bigger and better.