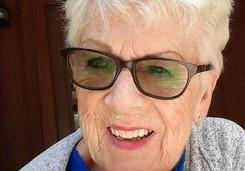 Joyce was born in Ohio on July 23, 1945 to Jerauld and Alberta McElrath. The family then moved to Iowa and Joyce attended school in Brandon and La Porte City, graduating in 1963.

Joyce worked at Rockwell Collins from 1973-1987, then moved with Jesse to West Virginia when he worked the Coal Mines. Upon their return to Iowa, Joyce owned and operated Joyce's Tap in Urbana for several years, and she also worked part-time for Crest and Heritage Microfilm Companies.

In 2019, she purchased a small acreage in FL and that became her happy place.

Joyce had a zest for life and it showed. She was adventurous and not afraid to try anything. She played in a band after teaching herself to play guitar, raced stock cars at Hawkeye Downs, rode her Harley Davidson all over Iowa, and spent many hours with friends golfing, playing pool, bowling, boating, and fishing.

She was preceded in death by her parents, her husband Jesse, sister Susan, brother Bob, brothers-in-law Ronald and Everett, and nephews Rick and Poke.

At Joyce's request, her body will be cremated. A Celebration of Life will be held at a later date. Memorials will be split between the Critter Crusaders and The Mark Harrison Cancer Foundation, 2 causes that meant a lot to her.