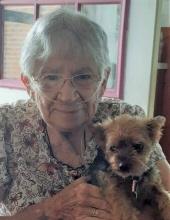 Pauline P. Hobbs, 82, died Wednesday, October 6, 2021, at her home in Vinton, following a lengthy illness.
Funeral services will be held 10:30 a.m. Wednesday, October 13, 2021 at Van Steenhuyse-Teahen Funeral Home in Vinton with Pastor David Condry officiating. Visitation will be at the funeral home from 4:00 to 7:00 p.m. Tuesday, October 12, 2021, and for an hour before services on Wednesday. Burial will be at Evergreen Cemetery, Vinton.
Pauline was born in Benton County, Iowa, in the Urbana and Center Point area on January 1, 1939, the daughter of Lloyd and Barbara Wintringer Lovell. She was raised in the Urbana and Vinton area.
On December 16, 1955, Pauline was united in marriage with Chet Hobbs at the Prairie Creek Parsonage. They settled in Vinton after their marriage. Chet preceded Pauline in death on February 26, 2015.
Pauline worked at Perfex for six years, and she also worked at the Vinton Lutheran Home, caring for the elderly. She retired on July 11, 2011.
Pauline enjoyed cooking big meals on holidays and having her kids at home. She loved working in her flower and vegetable gardens. (She always tried to have something in her garden that no one else had.) She loved to go fishing, saying, "Sometimes I would rather fish than eat." Chances were if you saw Pauline, you would also see her beloved dog, Peanut.
Pauline is survived by one daughter, Jane (Mike) Ades of Batavia, IA; two sons: Greg "Dutch" Hobbs (Angie Papesh, AKA-Agnes) and David Hobbs, all of Vinton; seven grandchildren: Wayne, Jeannie, Gentry, Kellie, Nichole, Justin and Desirah; eight great-grandchildren; five sisters: Luella Martinec of Garrison, Beulah (Dick) Feurhelm of Vinton, Bessie Todd of Waterloo, Charlotte Vasquez of California and Barb (Rocky) Bumgarner of Minnesota; three brothers: Lloyd "Butch" (Ann) Lovell of North Carolina, Bill (Cissy) Lovell of Texas and Raymond Lovell of Arizona; and special family friends: Sally Benson and Becky Kennedy, both of Vinton.
Pauline was preceded in death by her parents; her husband of 59 years, Chet; and three siblings: Eileen, Lyle and Mary Louise.
Van Steenhuyse-Teahen Funeral Home is caring for Pauline and her family. Condolences may be left at www.vsrfh.com.