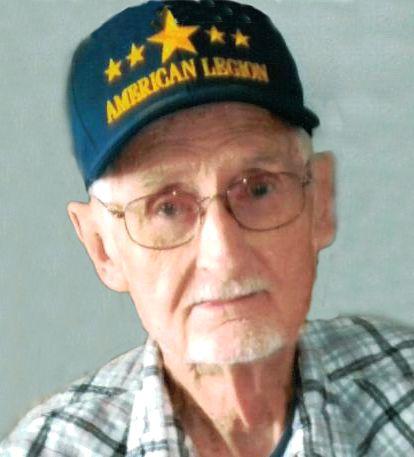 Graveside services for Dick and his beloved poodle Princess will be conducted at 3:00 PM, Friday, June 24, 2022 at Evergreen Cemetery in Vinton, with military rites conducted by the George G. Luckey American Legion Post #57 and the Patriot Guard Riders. Following the graveside, a celebration of Dick's life and luncheon will be held at the George G. Luckey American Legion Post in Vinton from 4:00 until 7:00 PM

Dick was born March 23, 1930 at Virginia Gay Hospital in Vinton, the son of Jay Charles and Jean (Colston) Bridge. He graduated from Lincoln High School in Vinton with the class of 1948. He proudly served his country in United States Marine Corps during the Korean War. On July 15, 1978, he was united in marriage Geneva (Roark) Rule in Cedar Rapids. Geneva preceded Dick in death on September 14, 1997.

Dick was a proud Vinton resident his entire life. He had worked at Henkles Skelly, Vinton Farmers Supply. He also worked as the custodian at the West School in Vinton until his retirement. He was a member and past commander of the George G. Luckey American Legion Post #57 for almost 70 years. Dick enjoyed stock car racing, and association with the Hogan race family. He also enjoyed visiting with Harley-Davidson riders, having owned a number of Harley's in his younger years.

In addition to his parents and wife Geneva, Dick was preceded in death by his daughter Suzy; 2 step-sons, Douglas and David; 2 great-grandsons, Chad, and Nathaniel.

Valerie Bearbower June 19, 2022, 10:32 pm My sincerest condolences to the family. I enjoyed visiting with Dick, and watching him drive by on a daily basis, checking on the neighborhood. He will be missed by many.
Larry & Sandy Driscol June 20, 2022, 11:57 am Our hearts are saddened to have lost one of the best friends we have had over the years. our sympathy goes out to each of the family members in this big loss. We will miss his weekly visits,and friendship over the years we've known Dick. RIP our dear friend! Larry & Sandy
Bob Kimm June 20, 2022, 12:36 pm Dick and I became friends in early 1951 when we were charter members of the Vinton Motorcycle Club. We only rode together a short time as he enlisted into the Marine Corps and when he came home, I went into the Air Force. He stayed in Vinton, and I never came back to live there.

We remained friends over the miles for over 70 years. I am going to miss our phone calls and mail packages. He was a great friend, and I am honored and proud to have known him and to have been called His Friend.
REST IN PEACE, DEAR FRIEND.
Thanks for being my friend!

Lu Horak June 20, 2022, 2:47 pm My sympathies to the family. I knew Dick my entire life. Such a kind, nice, one-of-a-kind man!
Rosemary Boisen June 20, 2022, 4:59 pm Dick was one of those people who you wished would be around forever. Kind man. Caring man. Great neighbor to my aunt who shared coffee and chat - no gossip, whenever he would see her in the backyard. Ready to help everyone.Good friend and I'll miss him and his dust free shiny red pickup around town. Rest dear friend.You deserve a rest. Thanks for your military service.
Diane Lyphout June 23, 2022, 6:01 pm We will cherish all the kind memories of Dick, Especially When he donated popcorn machine to the Vinton Lutheran Home, and brought much joy to residents, also how he was a friend to so many in the community. He will be missed by many!
advertiser content