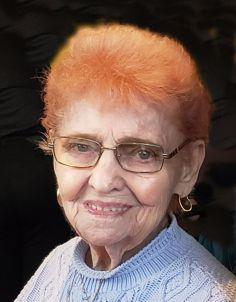 Funeral services will be held at 11:00 AM, Thursday, June 23, 2022 at Bethlehem Lutheran Church in Vinton with Rev. Phil Borleske officiating. Interment will be held at Oak Hill Cemetery in Coralville. Visitation will be held from 9:00 AM until service time Thursday at the church. A memorial fund has been established.

Lee Nelson was born in Iowa City on 9/29/1928 to Emil and Mildred (Thomas) Nelson. Lee grew up during the depression. Her father managed Piggly Wiggly grocery stores, specializing in opening new stores so the family moved often.

After graduating from Marshalltown, Lee was working in Ames when she met a veterinary student, Oran Robert "Doc" Corbett. They wed on 8/20/1956. Lee supported the family until Doc graduated in 1960. They moved to Vinton IA where they set up practice, raised a family and lived for the next 60 years.

Lee had many interests. She had a passion for sewing and embroidery. The couple had a well-known Great Dane kennel that raised many show dogs and champions. She was an ardent Iowa Hawkeye, especially wrestling, having season tickets and attending almost every national from 1976-2017.

She was preceded in death by husband O.R. Corbett, brother Robert Nelson and son Joseph.