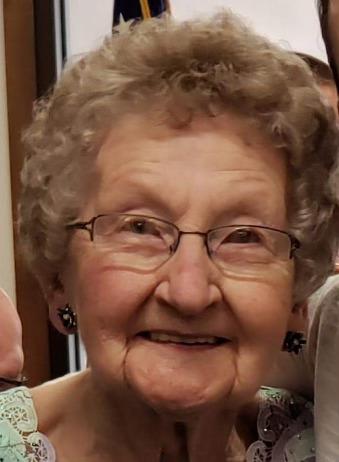 Dolores Mae Palmer, 93, of Mt. Auburn died after a short illness surrounded by family on Sunday, June 19, 2022 at the Virginia Gay Hospital. Services: 10:30 a.m. will be on Saturday, at the Mt. Auburn United Methodist Church by Pastor Luke Evans. Burial will be at the Mt. Auburn Cemetery. Friends may visit with the family on Saturday after 9:30 a.m. at the church. Van Steenhuyse Teahen Funeral Home is serving the family.

Dolores was preceded in death by her husband Derry in 2002, sister Betty Kistler, son-in-law Nick Miller and brother-in-law Harry Palmer.

Dolores was born on June 17, 1929 in Cedar Rapids, the daughter of Louis and Georgia Buresh Dusil. She graduated from Roosevelt High School in 1947.

Dolores married Derry Palmer on October 29, 1950 at the Little Brown Church in Nashua. She was first and foremost a wife and a mother, but would also do bookkeeping for Palmer Bros. Dolores was a member of the Mt. Auburn United Methodist Church, UMW, and the Mt. Auburn American Legion Auxiliary. She spent many hours volunteering at church, the auxiliary, Camp Courageous and throughout her community. Dolores and Derry mowed the Mt. Auburn Cemetery for many years.

Dolores enjoyed fishing, camping with Derry and their family, crocheting, gardening and canning. She loved to play card games, especially Cribbage and Phase 10, read, solve crossword puzzles, and have family dinners where she was able to spend time with her grandchildren and great-grandchildren. She used her love of crocheting to make each of her grandchildren tablecloths.

Instead of flowers, a memorial may be directed to the family to be used for Dolores' favorite charities. Online condolences can be left at www.teahenfuneralhome.com.

Lavonn westcott June 21, 2022, 3:34 pm My sympathy to all, she was such a joy to be around. She will be so missed at the Church functions and also by our Brandon Church. Sending prayers and God’s Blessings 🙏✝️🙏
advertiser content