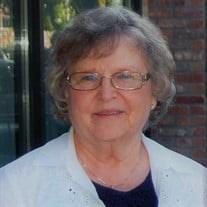 Betty was born on September 3, 1939, to Cecil Clarence and Gertie Mae (Hopper) Covington at their farm home in Benton County, Iowa, near Vinton. They moved to Vinton and lived there until they bought a store in Marengo, Iowa and moved there. After Betty graduated from high school, she was united in marriage to Russell Klein in Marengo. They had four sons; Brian Lee, Mark Alan, Steven Jay, and Paul Andrew Klein. Russell joined the United States Air Force where he was stationed in Vietnam. He was killed when his aircraft was hit by ground fire and crashed.

Betty and her sons moved back to Cedar Rapids where she earned her AA in medical records technology at Kirkwood Community College. She then took positions as Director of Medical Records Department at Kossuth County Hospital in Algona, Iowa, Skiff Medical Center in Newton, Iowa and a long-term medical center in Des Moines, Iowa. Betty moved back to Cedar Rapids and took a position in medical records at St. Luke's Hospital and worked there until she retired in 1999. She then took a part-time job at Murdoch-Linwood Funeral Home as a hostess. Betty then met Floyd Long, and they got married. The couple liked to travel which included Nova Scotia, the east coast, Alaska, and England as well as many bus tours around the US. Betty will be missed by her loving family and dear friends with whom she always had fun times together.