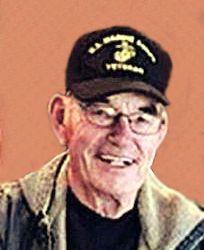 James Owen Fuller, 85 of Brandon passed away September 16, 2022 at Virginia Gay Annex in Vinton with complications from a motor vehicle accident.

Funeral services will be held at 11:00 AM, Wednesday, September 21, 2022 at Wesley United Methodist Church in Vinton, with Rev. Brian Channel officiating. Interment with military rites will be held at Cedar Crest Cemetery on Carter Avenue, East of Jesup at 1:30 PM Wednesday. Visitation will be held from 4:00 until 7:00 PM Tuesday also at the church.

Jim was born May 24, 1937 in Jesup Iowa to Omer and Mary (Woods) Fuller. He attended school in Jesup. He next served in the Marines for 3 years. He was very proud to earn his paratrooper certification. Jim had a well-rounded employment history and made many lifelong friends. He farmed, worked in maintenance at Virginia Gay Hospital, and caretaker of Evergreen Cemetery. He had his own heavy equipment business and retired from Benton County Roads as a maintainer operator on secondary roads. After retirement Jim worked side jobs running heavy equipment.

Jim had many hobbies he enjoyed. Fishing with his son, Doug was his favorite. He also enjoyed restoring and collecting Tonka trucks, woodworking (furniture, coat racks, picture frames, etc.). He restored a 1915 Oakland and a 57 Chevy. He built and remodeled many homes to fit the needs of his family.

Jim was preceded in death by his parents, a daughter Deanna Fuller of Creston, Iowa, and five brothers and four sisters.

A donation in Jim's name to the Cedar Bend Humane Society, 1166 W Airline Hwy, Waterloo, IA 50703 would be appreciated.

james mahurin September 20, 2022, 1:02 pm Sorry to here about Jim. He done a lot of work for me when we built the new Viking Galley Restauant
advertiser content