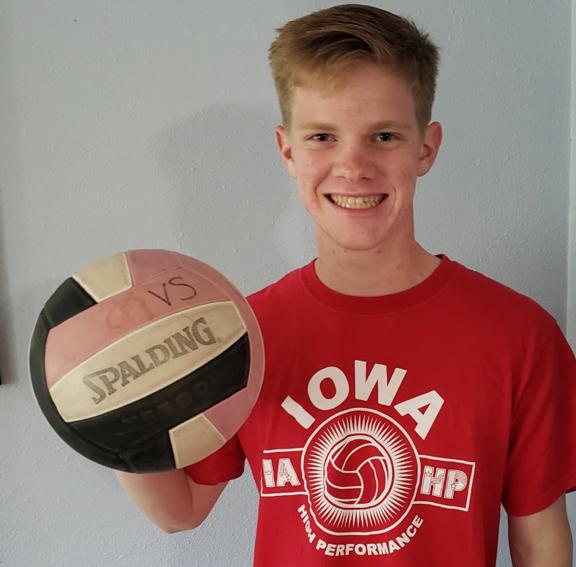 Noah Lindauer is a Junior at Vinton Shellsburg High School who has learned that he has a passion for a mostly unknown boys sport in the State of Iowa, volleyball.

There is no sanctioned high school boys volleyball through the Iowa High School Athletic Association. Noahs dad, Tom, coached the Vinton/Shellsburg girls freshman volleyball team when Noah was a freshman in high school. He started coming to practices at the beginning of the year and practiced with the freshman team. He then started staying for Varsity practices where the girls and coaches (Michelle Stepanek) welcomed Noah to participate in practices and sit on the bench to help him learn the strategy and take team statistics. He improved greatly in just the first season that he joined a boys USA Volleyball Club team out of Cedar Rapids, who he has played for the last two winters.

This past May, Noah was selected to attend the Iowa High Performance Camp at Coe College from June 7-10. There were 4 days of training on both team concepts and individual skills. The coachs that attended this camp were from all over the country, as far away as New York and including Iowa Native Ron Wilde who played for the Mens USA Volleyball team in the mid-1980s. Four of the coaches at this camp are currently working with the USA Volleyball program.

Noah was selected as one of two setters (10 boys total) to compete on the Iowa National Elite Boys team in the National High Performance Championships in Ft. Lauderdale, Florida from July 18-July 22. Last year the Iowa Boys Select team took home Gold in the Regional Division and this year the team will step it up a notch and play in the National Division. His HP team will be coached by Caren Kemmer and Devon Wells. Caren is a coach with both USA Volleyball and the head mens coach at Culver Stockton University. Caren is also a former three-time USA Womens volleyball Olympic team member. Devon will begin her seventh season as assistant coach at Grand View University womens volleyball team in the fall of 2019.

The National High Performance (HP) Program is a feeder program for the Youth and Junior National teams of USA Volleyball, and was created with the sole purpose of training and developing top-level athletes for the Olympic teams. Noah attended the Iowa HP camp that was comprised of amazing athletes from across the Region (all of Iowa and some of the border areas in IL, WI, NE and SD). The High-Performance Championships is one of USA Volleyballs flagship events. The 100+ team event features tournaments for both boys and girls that include teams from USA Volleyball Region HP teams, International teams and teams from the USA Volleyball High-Performance pipeline. Past International teams have included: Brazil, Chile, China, Dominican Republic, Italy, Mexico, New Zealand, Peru, and Puerto Rico.

I would like to bring the skills and experience I learn back to Vinton to help our high school girls team and any further club/next level team I will be playing on. My goal currently is to continue playing boys volleyball outside of high school and on through college said Noah Lindauer, 16, of Vinton-Shellsburg's Class of 2021.

This is a very rare opportunity for boys volleyball players in the State of Iowa, especially one that comes from a small town. While Noah is honored and excited to represent Vinton and the Iowa Volleyball Region at the national championships, there are many expenses associated with this level of competition, including tournament entry fees, travel, food, lodging and uniforms. The Iowa Volleyball Region estimates these costs right now to be about $1,000. If you would like to help Noah cover some of this cost for this unique opportunity your donation would be tax deductible since the Iowa Volleyball Region is a non-profit 501(c)3. Noah is also willing to do any odd jobs you may have for him if you are willing to donate to his experience. If there are any groups or organizations that would want Noah to speak to them about his trip upon his return from the HP National Tournament, he would be willing to do that also.

We have attached a link if you would like to donate online on or before July 5th to help Noah.

Support Noah's HP Volleyball trip to Fort Lauderdale on Mightycause
If you would like to mail or print a contribution form click here.