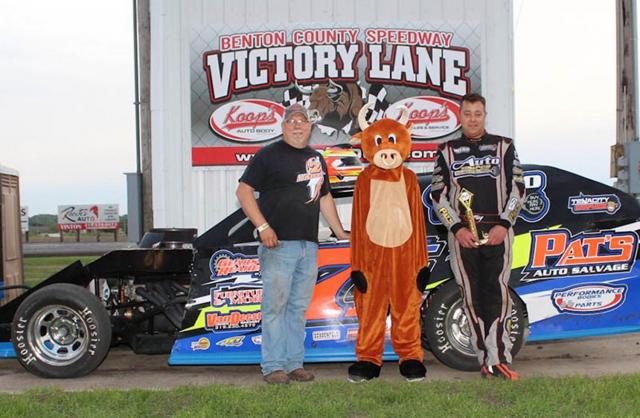 Troy Cordes became just the third driver - and first IMCA Modified - in Benton County Speedway history to earn 60 wins. His win Sunday was his third straight at the Bullring. (Photo by Jim Wittke)

Wet weather in the area forced the cancellation of SLMA Late Model tour action over the weekend, but John Emerson was glad Benton County Speedway kept the division on the schedule for a Sunday special.

Emerson ran away early then survived heavy pressure in lapped traffic to secure the $1,500 payday, his first return to victory lane at the Bullring since June 2, 2019.

From his front row start, Emerson jumped into the early lead. He paced the field and extended his advantage while a host of pursuers tried to keep within striking distance.

Midway through the 25-lapper, Emerson approached lapped traffic, which slowed his pace. That allowed a number of drivers to close the gap on the leader and on each other.

As laps wound down, the top six were on the same straightaway while Emerson struggled to work past a lapped car on the preferred bottom groove.

Pestka was able to momentarily work along the outside the leader before Goedert and Eckrich closed in.

Goedert slipped beneath Pestka and reeled in Emerson in the final set of turns, but Emerson slid beneath traffic to secure the victory as the checkers waved.

Goedert ran a close second ahead of Eckrich, Pestka and Gustin.

Troy Cordes made a little history of his own in the KISS Country 96.5 IMCA Modifieds. He scored his third straight win and fourth in five weeks in that 20-lapper. In doing so, Cordes became just the third driver in track history with 60 feature wins.

From a fifth row start, Cordes worked the high groove to perfection and found himself in contention at the midway point. He made his way around leader Ryan Maitland and set sail on the way to his career first three-race winning streak at the Bullring.

Seventeenth starting Chris Zogg made a terrific run through the field and made a bid for the lead following a late caution, but ran second at the finish. Brennen Chipp, Ronn Lauritzen and Maitland completed the top five.

Just two weeks ago, Jason Doyle earned the first win of his career in Independence. Sunday night, he earned his second in the IMCA Sunoco Stock Cars presented by Albert Auto.

Doyle raced into the lead early from his second row start and was never seriously challenged in the caution-free event. He took the checkers ahead of Jay Schmidt, Steve Meyer, Cole Mather and Miciah Hidlebaugh.

Kyle Olson raced to his first win of the year in the Karl Kustoms IMCA Northern SportMods presented by Christie Door Company.

Olson found the high side to his liking as he took over the top spot midway through the event and held off Brandon Tharp and Maguire DeJong on his way to victory. Ben Chapman and Sean Wyett rounded out the top five.

Kaden Reynolds raced to his second win in a row and third of the season in the IMCA Sunoco Hobby Stocks presented by Kwik Star.

From a fourth row start, Reynolds made his way to second early, then chased down Matt Brown to steal the lead midway through that 15-lapper on his way to victory. Brown, Joren Fisher, Justin Ginther and Michael Kimm followed Reynolds to the checkers in the green-to-checkers event.

Next Sunday, weekly racing at the Bullring will be joined by Micro Sprints and the make-up event for the Legends cars from a rainout earlier this season.

Stay up-to-date on the latest Benton County Speedway news by visiting BCSBullRing.com or @BCSBullRing on Facebook.