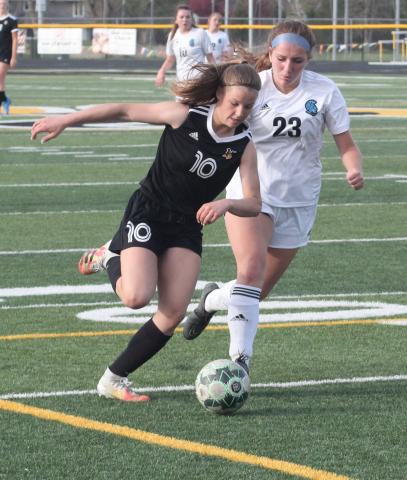 VINTON – Vikette soccer phenom sophomore Abby Davis had big expectations for the 2021 soccer season after not getting to play in 2020 due to a global pandemic.  Davis started off the regular season with nine goals in three games against the West Delaware Hawks, Independence Mustangs, and Maquoketa Cardinals.

She scored her first goal in 17 days on Friday, April 30 against the South Tama, then scored one against Dyersville Beckman, two against Cedar Valley Christian, a hat trick against Anamosa, the deciding goal against Center Point-Urbana, two against Monticello and a hat trick to break the record at West Liberty on Friday, May 21.

That hat trick was extra special as it came on her dad's (Shellsburg Elementary principal Ryan Davis) birthday.

Previous Sports Article
Vikette softball off to a 2-6 start