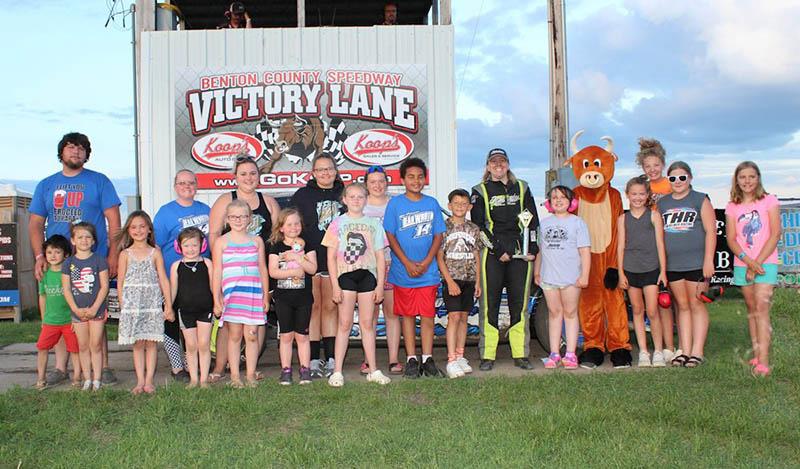 VINTON, Iowa (June 6) - When Damon Murty takes the lead of an event at Benton County Speedway, the race is typically for second.

Someone failed to mention that to Leah Wroten.

Wroten, who led throughout the 15-lapper for IMCA Sunoco Stock Cars presented by Albert Auto, lost the lead late to Murty, then took advantage of a caution with two laps to go to drive to her first division win on the Vinton quarter-mile.

Just prior to a caution with three laps remaining, Damon Murty inched around the outside of Wroten to assume command.

On the restart, Wroten quickly went back to work on the bottom groove, making her way past Murty and back into the top spot. She held off a late surge from Mueller to secure the victory. Damon Murty, Dallon Murty and Hidlebaugh completed the top five.

Ashley Reuman scored her first win of the year in the Mach-1 IMCA Sport Compacts presented by Auto Crafters.

Reuman pestered race-long leader Adam Gates before working around him on the final lap to take the checkers in thrilling fashion. Cristian Grady ran third ahead of Blake Driscol and Devin Coghlan.

For making a last lap pass on her way to victory, Bullring sponsor Christie Door Company awarded Reuman an additional $150 in prize money.

In his first night out in a brand new car, Olson gave his new ride the ultimate test drive in the Karl Kustoms IMCA Northern SportMods presented by Christie Door Company.

After slipping off the top of turns three and four in the early-going, Olson restarted the 15-lapper from the back of the pack.

While making his way through traffic, key caution periods assisted Olson on his charge to the front. He was able to challenge race-long leader Brady Hilmer in the late stages of the event.

After Hilmer lost a spring while the race was under caution, Olson worked past the leader on the final restart. He secured the win ahead of Joe Docekal and Brian Kauffman. Brett Thomas and Ben Chapman completed the top five.

Joel Rust made a rare appearance at the Bullring and ended the night in victory lane following the 20-lapper for the KISS Country 96.5 IMCA Modifieds.

Rust ran the high side to the top spot late in the event to score the win ahead of Derrick Stewart. Dylan Thornton ran third, Troy Cordes was fourth and Jared Van Deest rounded out the top five.

Reynolds found the lead early and then ran away and hid from the field, taking the checkers by 7.2 seconds ahead of second place finisher Brett Vanous. Matt Brown, Michael Kimm and Dalton Weepie completed the top five.

Drew Papke made the tow from Bismarck, N.D. payoff as he picked up the $1,500 victory in a special appearance by the INEX Legends.

Papke, who was also the winner Saturday night in Maquoketa, was offered an additional $200 if he could win from the back of the 15-car field.

Not only did Papke accept the challenge, he made his way through the field and into the lead at the midway point of the 25-lapper. From that point, Papke withstood pressure from Ryan Sullivan and Dave Eberle to seal the $1,700 payday.

Weekly points battles resume in all five weekly divisions next Sunday and includes an attempt to set a new Guinness Book of World Records mark for the largest candy dash held at a race track. Over 1,600 lbs of candy is expected to be up for grabs on the front stretch. All kids in attendance will be invited down to pick up their share and are encouraged to bring bags to carry the goods home.

For the latest speedway news, check out BCSBullRing.com or visit the track's Facebook page at @BCSBullRing.