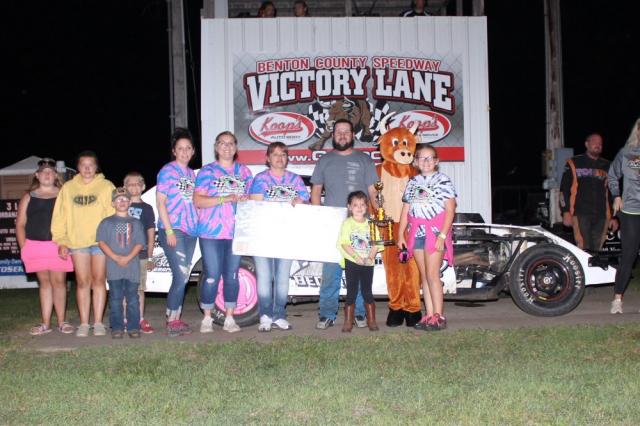 Watching the IMCA Modified feature from his vantage point in staging gave Austen Becerra a pretty good idea where the fast line would be for his own main event Sunday night at Benton County Speedway.

The Carthage, Ill., visitor made his way around the high side of The Bullring, leading all 20 laps of the Karl Kustoms IMCA Northern SportMod presented by Christie Door Company feature for a $2,200 Urbana 5 special payday.

"Sitting in staging, I could see Cayden Carter running the top side and thought that was going to be the place to be," said Becerra, winner of the 2018 Hogan Memorial in one of his earlier, rare visits to Vinton. "I had no idea how much we were ahead of everybody else. I just ran my own race, never felt any pressure and just got into my own rhythm."

Carter took over second on the restart; another yellow waved on lap 13 and much of the field behind him moved higher up on the track in an unsuccessful effort to keep Becerra in sight.

"It means a lot for me to be able to win this race. There are a lot of people who put a lot of effort into this," said Becerra. "Two years ago we made it up to third (after starting deep in the field). I'm glad we could come back and win it."

Another first followed the Urbana 5 checkers when Becerra was approached by young fans and asked for autographs right before he went into post-race tech.

The seventh annual Urbana 5 special brought 155 entries to The Bullring and played out to a very full grandstand. Held to remember the five area youth killed in a 2015 traffic accident near Urbana and to encourage people to become organ and tissue donors, the event saw additional money paid out in each main event and drawing prizes awarded to spectators throughout the evening.

Jay Schmidt completed an incredible run to the front of the IMCA Sunoco Stock Car presented by Albert Auto Service field after spinning out of second early on. Schmidt, already eligible to qualify for the B & B Chassis All-Star Invitational, rallied to the $1,100 checkers and earned a $150 bonus as well by passing Jason Doyle on the white flag lap, winning by less than a car length.

Kaden Reynolds checked out, leading all but the opening lap of the $700 to win IMCA Sunoco Hobby Stock presented by Kwik Star feature and outrunning Nathan Ballard after two late restarts.

Lucas Rick was the $300 Mach-1 IMCA Sport Compact presented by Auto Crafters winner. He led start to finish of the 15-lapper, with Travis Losenicky the runner-up. William Michel won the make-up feature for the 4-cylinder class.

And Dave Eberle won the Legends feature, in just his second night in a new race car.

"I love this place," the Freeport, Ill., driver said from victory lane. "I love coming here."