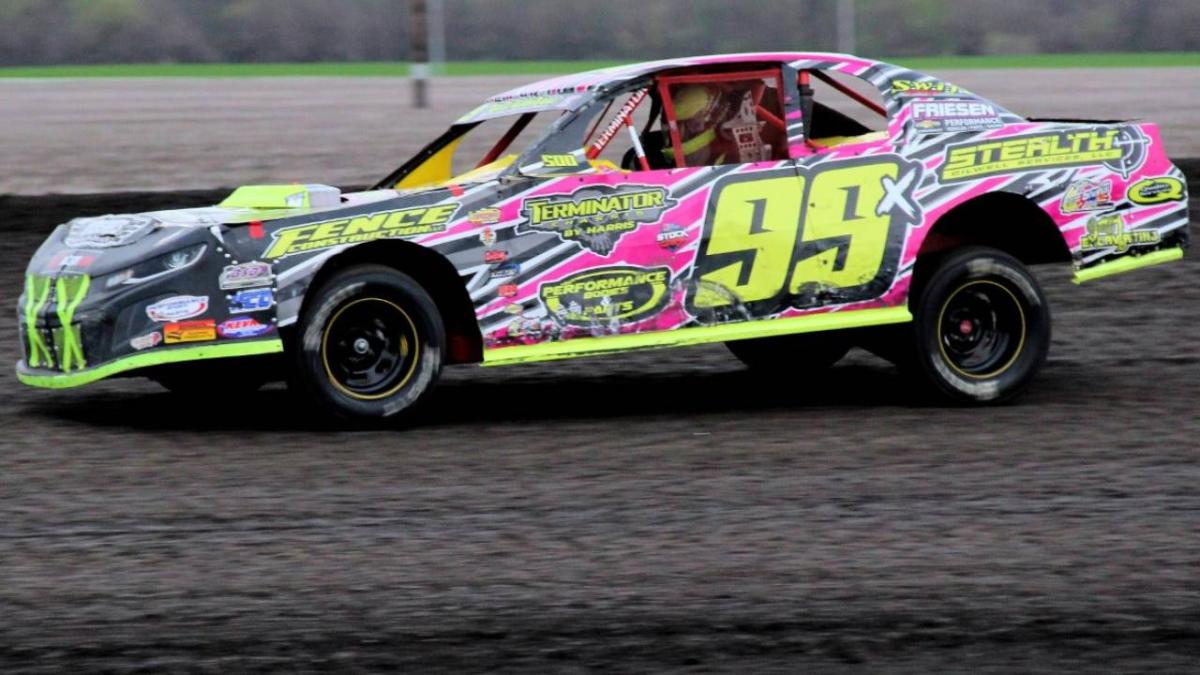 Also making a successful return was a familiar face in victory lane following the IMCA Sunoco Stock Car feature. Dallon Murty won an entertaining battle with his father, Damon, to score the win.

The father and son drew front row starting spots and proceeded to put on a show for the duration of the 15-lapper.

Never separated by more than a car-length, the Murtys battled for the lead from the onset. Dallon, who spent much of the event chasing Damon, snuck ahead with a last-lap pass to secure the victory. Kaden Reynolds and Jason Doyle completed the top four.

Late-race excitement was also in store for the Friesen Performance IMCA Modifieds presented by KISS Country 96.5.

Joel Rust secured the early lead from his pole position start and quickly built a sizable lead while Dylan Thornton began his pursuit from the fifth row.

Rust's lead was just over a straightaway by the time Thornton made his way into second on lap 11 of the 20-lapper.

As Thornton reeled in Rust, the lead pair also gained ground on a pair of lapped cars. Ultimately, the leaders battled side-by-side as they navigated traffic, which was also door-to-door in front of them.

Thornton took better advantage of the slower traffic and snuck past to assume command and steal the thrilling win. Johnathon Logue and Troy Cordes ran third and fourth, respectively.

Although he stayed close, Lopez was unable to mount a charge allowing defending track champion Olson to race to victory, his 55thin weekly racing history at the speedway. Kyle Olson and Ben Chapman rounded out the top four.

Ryan Havel made a rare appearance at The Bullring pay off as he drove to opening night honors in the IMCA Sunoco Hobby Stocks. Havel took the lead early, then checked out on the field to race to the win ahead of Luke Bird, Joren Fisher and Bradly Graham.

Travis Losenicky was the class of the field in the Mach-1 IMCA Sport Compacts. Losenicky made his way to the front in the early stages of that event to drive to victory ahead of Tyler Fiebelkorn, Blake Driscol and Logan Clausen.

In their first appearance as a weekly division at The Bullring, the INEX Legends presented by Legends.Direct provided a thrilling opening night for race fans in that 15-lapper.

Dave McCalla and Griffin McGrath split time out front before Jordan Miklas made his way into contention from a fifth row start. Miklas took the lead late to seal the win ahead of McGrath. Michael Weber and Eric Blumer completed the top four.

Weekly racing action will resume this Sunday, May 15 in the five IMCA sanctioned divisions.

Next Sports Article
The Bullring is back in action May 15