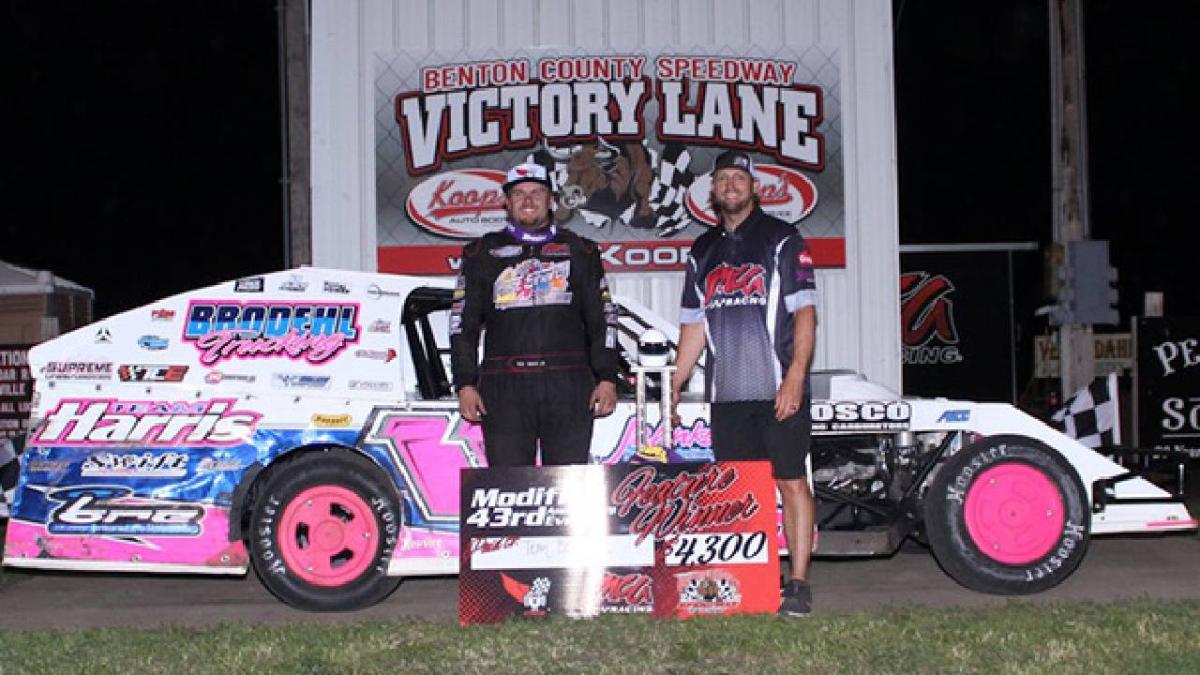 Tom Berry Jr. celebrated another special win at Benton County Speedway on Monday, leading all 43 laps of the 43rd Anniversary main event for Friesen Performance IMCA Modifieds and going home with $4,343. He is pictured with IMCA President Brett Root. (Pho

Tom Berry Jr. led all the laps and Sam Wieben led the most important one in the Monday night 43rdAnniversary special at Benton County Speedway.

"It's always pretty special to win at the home track of IMCA," said Berry, who was checking and double checking his car while crewman and right hand man Josh Capalla got the ace in the intermission card draw that gave him the inside front row start. "I don't get to start on the front row that often. I'm glad I was able to take advantage of it."

Fast from the drop of the green in the Memorial Day show, Berry had five lapped cars as a buffer between his back bumper and Richie Gustin when the first caution came on lap 26.

Four more cautions waved before the end of the race but Dotson couldn't challenge and settled for runner-up money. Rust, Cody Laney and Gustin completed the top five. Jake McBirnie was sixth and hard charger Troy Cordes motored from 25thstarting to seventh.

"I got my first win in Iowa at this track with my dad here in 2016, and I won six weekly races and a Dirt Knights Tour race here when I won the national championship in 2020," Berry said, "so winning at Benton County is always special."

Already Fast Shafts All-Star Invitational qualifying eligible, Berry earned a $4,343 share of the purse, plus a $1,000 bonus from a sponsor for his victory. Wieben collected $2,000 along with a $150 bonus for making the winning pass on the final circuit of the SportMod 25-lapper.

Braden Richards and Kuhl were the early leaders before Wieben moved to the front of the field. Tony Olson settled into second before the caution came out on lap seven.

Wieben had put some distance on Olson, Kuehl and Logan Anderson before catching up with the back of the pack on lap 18. He got through traffic the quickest but another caution set up a four-lap dash to the checkers.

A slide job by Anderson came up short before Kuehl challenged and just beat Wieben to the stripe on the 24thlap. Wieben had the answer though, and beat Kuehl back to the line by a tick more than a tenth of a second.

"I was keeping my eye on the temperature gauge and counting laps," last a winner at Vinton eight years ago. "This was my biggest payday for sure. I won all my big races here. I won the Hogan Memorial in 2014 and this ranks right up there with that race."

The shared history of Benton County Speedway and IMCA was a frequent topic Monday night. The first-ever IMCA Modified feature was held there in 1979 and IMCA Northern SportMods have been sanctioned at Vinton since 2005.