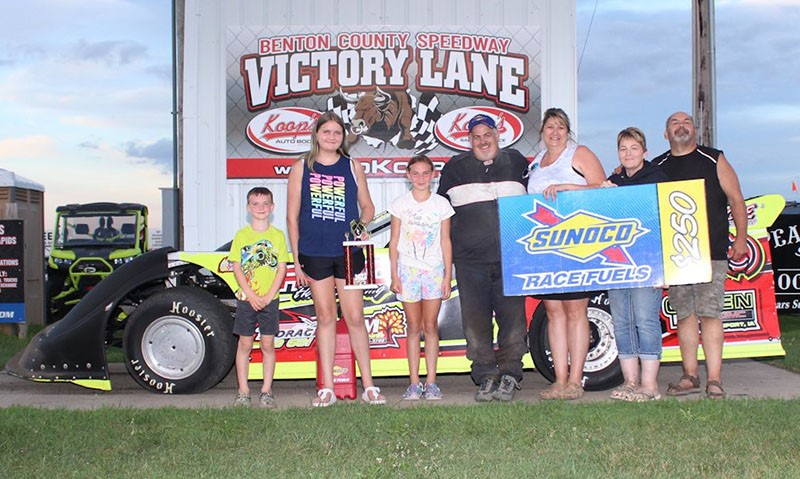 
VINTON, Iowa (July 24) - Andy Nezworski made the most of the lone appearance for the IMCA Sunoco Late Models this season at Benton County Speedway.The southeast Iowa racer ran down race-long leader Dalton Simonsen and stole the lead with two laps remaining to take the thrilling win on the quarter-mile.From his pole position start, Simonsen rocketed into the lead and quickly pulled way from the pack while Nezworski battled Bobby Hansen over numerous laps for second.Just shy of the midway point of the 20-lapper, Nezworski slipped past Hansen, but was running 2.2 second behind Simonsen by the time he made his way into the runner-up spot.Nezworski spent the next 10 laps cutting into the deficit and was able to draw even as lapped traffic slowed the leader. He slipped past Simonsen as the flying green waved to sail to victory. Simonsen ran second ahead of Hansen and Kevin Kirkpatrick.In addition to the $1,200 winner's share, Nezworski pocketed the $250 Sunoco Race Fuels bonus.The return of the Late Models to The Bullring was sponsored by Christie Door Company and Midwest Buildings Inc.The INEX Legends presented by Legends.Direct were racing for increased prize money in recognition of C.O.P.S. (Concerns of Police Survivors).It was Jordan Miklas, who had won four of the previous eight Legends events in Vinton this season, standing in victory lane again at the completion of that 18-lapper.Griffin McGrath led throughout, but received persistent pressure from Parker Jones, Michael Weber, and eventually eighth starting Miklas. A late restart allowed Miklas to race his way into the stop spot to score the win. McGrath ran second, Jones was third and Robby Morrison completed the top four.Dallon Murty and Kaden Reynolds earned their fifth wins of the season in the respective divisions; and the fourth time the young speedsters visited the winner's circle on the same night.Murty raced from the fourth row to earn his fourth win in the last five weeks in the Friesen Performance IMCA Modifieds presented by KISS Country 96.5. Murty chased Jesse Belez throughout much of that 20-lapper before racing the low groove into the lead on his way to victory. Belez finished second ahead of Mark Schulte and Brennen Chipp.From row five, Reynolds worked through traffic and battled Jason Doyle for the top spot before racing away to his fourth straight win in the IMCA Sunoco Stock Cars presented by Vermedahl Logistics. Doyle, Shawn Bistline and Norman Chesmore completed the top four.Joren Fisher raced to his second win of the season in the IMCA Sunoco Hobby Stocks. From the second row, Fisher quickly challenged for the lead and protected the top groove once he made his way to the front in the early stages of that 15-lapper. He pulled away to take the checkers ahead of Scott Siems, Matt Brown and Brett Vanous.Joe Docekal came from the seventh row to earn his second win of the year in the Friesen Performance IMCA Northern SportMods presented by Christie Door Company. Docekal made his way through the pack and around Josh Banes late in that 15-lapper to score the victory. Banes, Colby Heishman and Ben Chapman rounded out the top four.Spencer Roggentien earned the first win of his career in the Mach-1 IMCA Sport Compacts. Roggentien and Nolan Tuttle battled throughout the first half of that 12-lapper before Roggentien was able to break free to race to the milestone win. Tuttle, Blake Driscol and Steven Schmitz followed at the checkers.There are no races scheduled for next Sunday, July 31, as a mid-summer break will offer area racers and fans a night off before a busy three weeks to close out the season.August 7 will be Autism Awareness and Back-to-School Night, plus $2,000 to win for the IMCA Stock Cars in the Bald Tire Bash. August 14 will see the return of the A.I.R.S. cars, plus Sport Compact Super Sunday with a $500 winner's share on the line for the four cylinder division. The season will come to a close with the August 21 season championship program.Information will be released on each of those events as they approach.The latest speedway news is available atBCSBullRing.comor @BCSBullRing on Facebook.