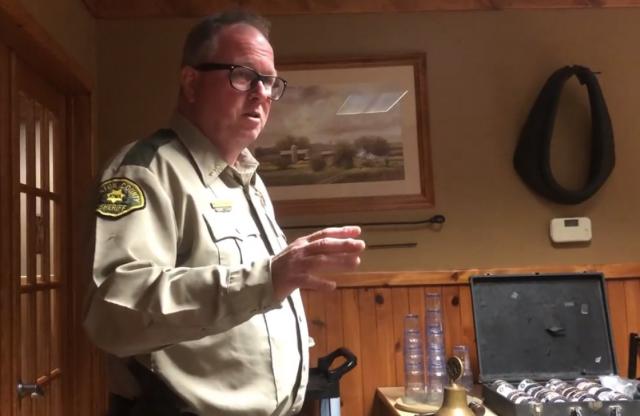 On Tuesday, Benton County Sheriff shared an update on the status of COVID immunization shots given in Benton County. At last count, 13,000 have been given.

He also shared some of the upcoming events that will be happening this summer. The Iowa Ride which was to make its inaugural stop last year will now be coming this year. The Benton County Fair will be up and running, as well as Party in the Park and most of the regular events for summertime. He mentioned that on the 15th the restrictions will be somewhat relaxed on county property.

Also on the top of his mind were the difficult situations that the Sheriff's Office has dealt with in some of the area deaths this year. He shared his concern about the outcome of the events in Minnesota and how it could possibly affect all of those in law enforcement even though the two are not related.

Benton County Sheriff's Department has been ahead of the curve he said when it comes to mental health issues in the county and his team's response. A couple of years ago, the county began taking along social workers to some of the calls where they knew they would need to assistance of someone trained to help in de-escalating situations for officers. The county has a law enforcement liaison to go along on these calls, county-wide. The Rural Access Center has a Rural Access Hub inside the center to help those that might be having a mental crisis and might need a place to work things out. The liaison comes to the county through Foundation 2 which also offers Mobile Crisis Outreach which is able to arrive at the homes and help in any way that they can. The county was able to use some tax money from a levy that was collected and returned to the county that was required to be used for mental health in the county. Benton County is part of the Mental Health Region which includes 9 counties.

The Benton County Jail is down to16-20 inmates, usually, it runs 30-36. Because of COVID, there are quarantine cells kept open in case they are needed. In 2019 the jail was awarded as the Best of the Best for a medium-sized jail.

Tippett shared some of the inner workings of the jail. The prisoners he explained were sometimes juveniles that were residents brought in from other counties. He said that at times the inmates would be able to see in the reflection of the glass that surrounds the command center outside their cells. Sometimes the inmates would spot a member of a rival gang that might also be there. Tippett said the noise level was very loud because of that, but it was brought down by a simple fix. Tint was added to the cell windows so that the jailers could see in but the inmates could not see out.

He explained that the jail offers a commissary for the inmates. As long as they have the money, he explained, they are allowed to buy snacks. They also have a phone service that is available to the inmates. The inmates can buy a phonecard, make phone calls, and use video visitation. The phone numbers that they call have to be approved. Again if they have the money they can access all of these services.

The jail recently added a text program called, "Chirping" that inmates can use it to send and receive text messages. The rate is 10 cents per message. Tippett said the first week they had 10,000 messages pass through the phones. Every, "LOL," "Thanks." "What's up?" is 10 cents. Every message is recorded on pages for the jail to review.

Each inmate is charged a daily fee and all of that income from the jail goes back to the general county fund. All of the services brought in through the other services have been used to update the mattresses, replace a $12,000 dishwasher at the jail, bring in a commercial washer and dryer which cost $13,000 with all of the electrical and plumbing that was needed. The money has also paid for clothing for the inmates.