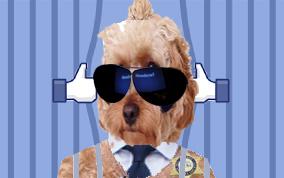 They tend to censor things that quite frankly shouldn't be. They censor jokes that somehow trigger a fact-checker. I don't know if that's because our society now needs to point out that a joke is indeed a joke or we've just reached a level of stupidity that we now have to explain simple jokes.

I think, perhaps Mr. Skinny Jeans Man Bun Wearing California Guy is in charge of the Facebook Jail button. I was surprised to find out while talking to another woman about her husband and some of his antics that I cannot say that he is acting like an animal with canine characteristics. That's considered bullying. It goes against all of their community standards. Now quit laughing supposedly Facebook has standards.

Nevermind all of the stuff that the original post shared concerning this crossbreed had done, and the way the mongrel was treating his wife, and family. You can't point out the obvious and just say that he's well a...four legged cur.

In Facebook's defense, it IS an insult to four-legged species to compare anyone in the human species who are lowdown excuses for human beings to something as sweet as a yellow lab. I really COULD understand how that would be offensive to dogs. The more I think about it, it really isn't nice to drag innocent little puppies into such discussions.

Just to clarify, in general, I don't think that men have the same DNA as the poodle down the street, but some of them, well, I wouldn't be surprised to see them camped out near a fire hydrant. Of course, I know women that fall into that category as well. Now if the situation was reversed and I was chatting to a guy about his wife acting like, well the poor little canine animals, I probably wouldn't use the proper word for that and just use the word, dog, again.

For some reason, this just added to my list of "are you kidding me" moments in 2020. So I'd better be good. No more "bullying". Unbelievable. As I'm typing this I just had a message that they upgraded me from a bully to someone who used "hate speech" in my comment according to Facebook. Good grief.

Hmmm, let me ponder that for a second.

They are right, it makes it sound like I hate dogs when I imply that they are anything like some people. I don't. I LOVE dogs! I miss having a dog. I want to get a dog, but I'm not home long enough to have a dog. My apologies to dogs.

Facebook, bless their little pointed heads, would like for me to read this about "Hate speech." If you get bored with that, they also have a blog series called, Hard Questions. Of course, I read neither, and don't intend to. The next thing you know, I'm going to have to go to some online class that will tell me that I should not say such things. Facebook also said when I appealed it that it could take WEEKS to review my appeal but it took mere seconds. However, a complaint popped up that I've had into them so long ago, over a year in fact, which revolved around someone threatening another woman, well, that one they still haven't had time to deal with. No, THAT complaint will just sit there ignored. It's okay to be demeaning and threatening to women, just don't hit the nerve of the Skinny Jeans Man Bun Wearing California Guy.

Not that I think there's a bit of bias here or anything...(that was in my sarcasm font)

So here I am, learning that I dare not imply that a member of the male gender, is a mutt, but you can however be really nasty to a woman. I kinda need the Skinny Jean Man Bun Callifornia Guy to let me use their platform so I'll not use my "hate speech" again. Being a rule follower, I'll try to remember to never say that someone is acting like...well...you know...THAT..at least on Facebook. I'll go back to being a good girl and I will not state the obvious (on Facebook) about people I've seen with doglike characteristics

Oh, at the same time I'm typing, this just came across Facebook, I'm surprised they haven't banned Steve Harvey of Family Feud fame...I mean HE did it too!

Now, I've spent way too many hours typing and retyping this, and thinking about it and pondering and I have to say. I'm still stuck on one thing. Is it really Mr. Skinny Jean Man Bun Callifornia Guy making the call? Or is it Ms. Cranky Pants rapping my knuckles telling me to be nice to the boys? How are these decisions made? Is there a Facebook board meeting where they randomly call men dogs and women the female version of that and they gauge by their reaction whether or not it's bullying or *gasp* hate speech? Is there a barometer that if the guys bust out crying, well, like a little girl, then it's "hate speech?"

When you use the term "hate speech" to say that calling men "dogs" you lessen the value of the term "hate speech." Trust me, the word "dog" in the context of some men that I know is not hate. That's being as kind and as loving as one can be when describing their actions, in other words, that's nice.

The term "hate speech" should be reserved for what we know is hate. Words used to pick on someone for something they can't help. Oh wait, maybe they are right. Maybe guys can't HELP being dogs. Maybe I'm wrong to point it out.

So I will add to my list of things that I cannot say or do on Facebook. So let this be a warning to you, whatever you do, DON'T upset Mr. Skinny Jean Man Bun Callifornia Guy with such nasty words. He could cry into his keyboard and crash his computer or something, the poor little mutt.

Next Opinion Article
Letter to the Editor: Coronavirus Poem

Previous Opinion Article
Letter to the Editor: Conservation needs to be a Priority in Iowa's budget

Patty Morgan September 9, 2020, 11:38 am You had me in stitches!
Rosie Boisen September 9, 2020, 2:32 pm Think of it this way - you are keeping someone employed to read all those bulling comments you make. You get too politically correct, he or she will be filing for unemployment. People will soon want Erma Bombeck books removed. Talk about great, funny side splitting sarcasm and joke - she just always said it like it is/was. We should be so lucky in today's atmosphere.
Gerald Bates September 10, 2020, 5:38 pm Very well written and on point!
advertiser content