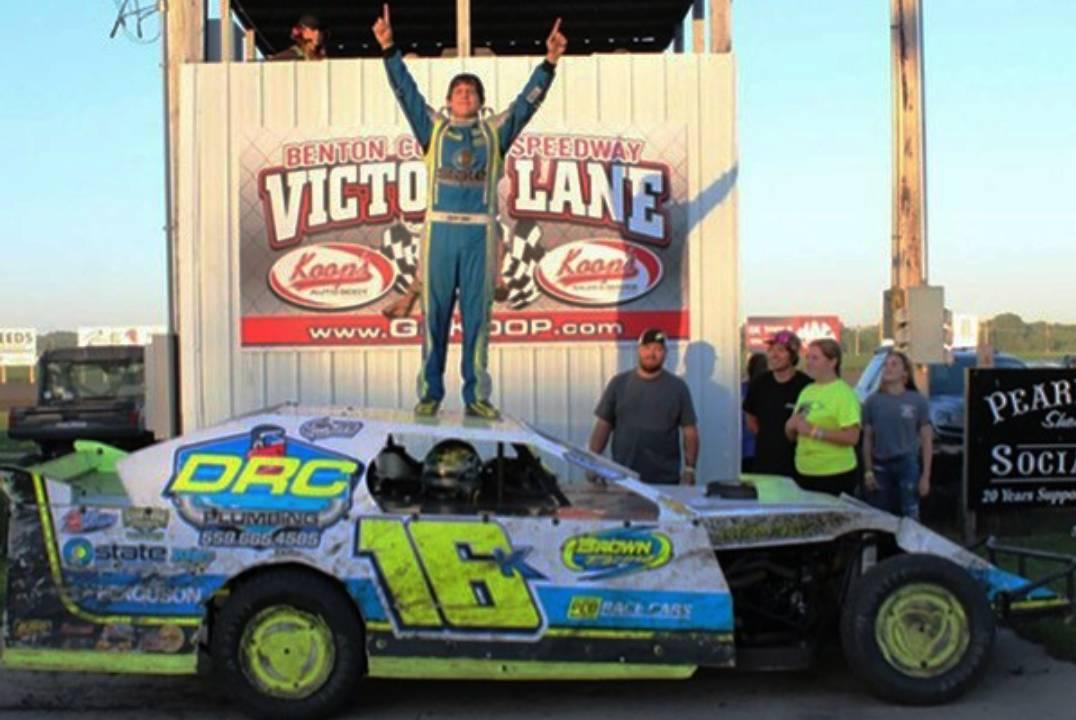 Kaylin Lopez celebrates atop his Friesen Performance IMCA Northern SportMod after earning his career first win in the division at Benton County Speedway June 23 during the Benton County Fair. (Photo by Jim Wittke)

The Benton County Fair will always be special to Kaylin Lopez.

Lopez chased pole-sitter Justin Wacha for a handful of laps before working around the leader just shy of midway. He held the point for the duration of the 15-lapper to score the memorable win at The Bullring.

Kyle Olson made a late charge from a fourth row start to earn runner-up honors, one second behind Lopez. Tony Olson and Wacha completed the top four.

Murty took the lead a few laps into that 20-lapper and then survived a late restart and pressure from Joel Rust to seal the victory. Troy Cordes and Ryan Maitland rounded out the top four.

Ryan Havel earned his second IMCA Sunoco Hobby Stock win of the year in convincing fashion. From his second row start, Havel quickly found his way to the top side and pulled away from the pack.

Brett Vanous, who started eighth, chased Havel around the top of the fast quarter-mile, but settled for second nearly a straightaway behind the winner. Dalton Weepie was third and Matt Brown was fourth.

Lukas Rick ran in the top three for much of the Mach-1 IMCA Sport Compact feature. He was first to cross the line in a wild finish in that 12-lapper.

Travis Losenicky took the lead and seemed poised for his fourth win of the season when his engine went up in smoke forcing a restart with three laps to go.

Korey Lana, who inherited the point, had the race in hand until he drifted off the top of turn four coming to the checkers, allowing Rick to race to his second win of the season. Spencer Roggentien, Thomas Werning and Trystin Belthuis completed the top four.

The American Iron Racing Series (A.I.R.S.) was also in attendance for the fair race. Tyler Bartholomew made the long haul from Dickinson, N.D., pay off as he edged Jake Hayes at the line for victory in a photo finish. Ron Cook and Tracy Quigley ran third and fourth, respectively.

Fair action continues Friday night with push races and enduro. Grandstand entertainment for the fair concludes with the annual demolition derby Saturday. There are no races scheduled for Sunday.

Next Sports Article
Sprint Invaders return this Sunday to The Bullring