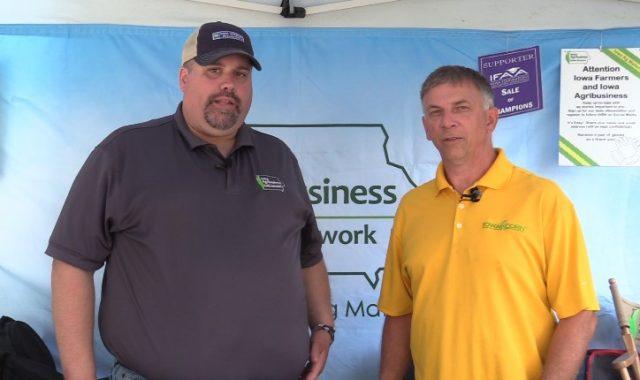 Now, on to new business.

As we rode the second half of the Iowa State Fair, we also know that it won't be long and the combines will hit the field, tillage will start to happen, and we will be setting the stage for next year's growing season. That is usually accomplished by the farmers who fall-apply fertilizers. However, prices are still up from last fall. There is a lot of talk about the problem, but solutions haven't been moving as quickly as producers and commodity groups would like to see.

The Iowa Corn Growers Association (ICGA) is one of those groups who believe this cannot last and has been engaging along with other entities to make the voices of producers heard in Washington. The fate of many family farm operations is hanging in the balance of these discussions.

Lance Lillibridge is a Vinton, farmer and just finished his term as President of the ICGA. He stopped at the IARN booth during the Iowa State Fair and chatted with us about the situation as it stands right now. He recently was part of a meeting with the Federal Trade Commission, as they investigate the situation.

"So we got a call from the Federal Trade Commission that they were going to be in Des Moines, Iowa, and would like to visit with some corn farmers. So I attended the meeting. It went well. There were two trade commissioners there. It was a bipartisan type meeting. Parties from both sides of the aisle met and we had a lot of conversation about how fertilizer prices are affecting farmers and what the future looks like on that. Along with what kind of conduct we're seeing in the counties and the state concerning how fertilizer is being sold and dealt with. There's a lot of issues there," Lillibridge said.

When Lillibridge talks about "conduct", he is talking about how some retailers are refusing to give producers a price on the fertilizers they need. This means farmers cannot book their supplies or even budget their operating costs for the supply they will need.

Lillibridge continued, "One of the biggest challenges and frustrations that I face and other farmers face is even getting a price for fertilizer. It's very difficult to plan for next year and we need to be doing that now and I can't even get a price for fertilizer. I contacted a retail location yesterday and asked for fertilizer prices. They said, 'well we don't have those yet, might not have them for a few weeks." What I don't understand is what are we waiting for? So, that's a problem.

Earlier this summer, Lillibridge hosted a roundtable discussion with Iowa Senator Joni Ernst. The message they gave to her was that there is an unfair marketplace when one particular company controls 85-90% of the fertilizer supply, there is no way to get a fair price. Lillibridge also added that while the Federal Trade Commissioners could not comment about any investigations that might be happening, one could easily infer that investigations were happening, based on the questions they were getting asked.

Fertilizer suppliers have long tried to blame the situation in Russia and Ukraine for the increases in prices. While this hasn't necessarily helped the situation, the war wasn't happening last fall, when prices started their 300% price increase. Lillibridge says that the fertilizer companies are relying on our short memories. "I think we all know that the problem came before the war. For the fertilizer company, it was like they had a perfect place to blame the issue on. The war didn't help anything. There are some shipping issues out of that region. But I'll tell you the thing that probably hurts us the most is the 20% tariff on phosphate fertilizer, that totally uncalled for."

Follow along with the ICGA as they continue to work for a better situation in the fertilizer markets.