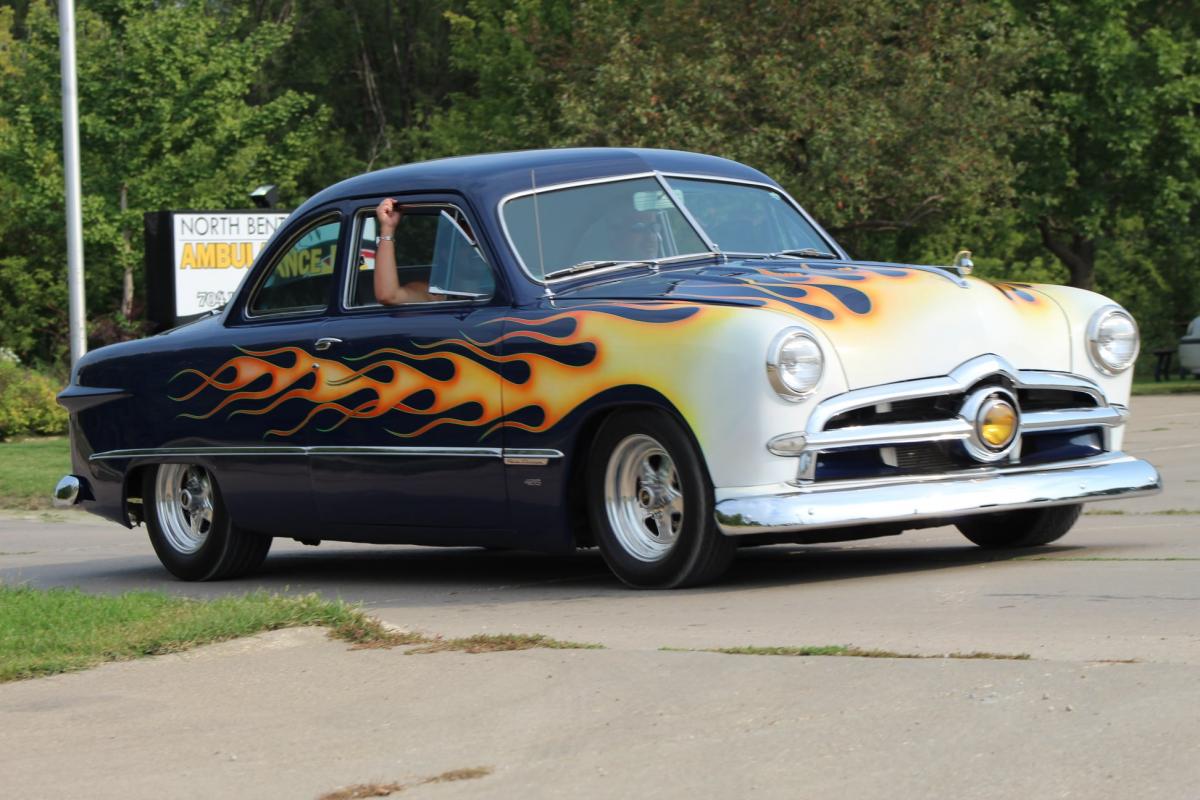 9/11/2021 started on a sobering note with news coverage of all of the memorial services being held throughout the country. Following that, the area legion organized a short memorial service at the courthouse.

Leaving that I was left remembering and pondering where I was 20 years ago, and some of the things linked to that day. So I drove around the county a bit just to reflect. As I did, I passed a lone pickup parked alongside a cornfield bearing two American flags. I've seen it there before, but yesterday it made me stop and take a photo.

Then I headed back to take pictures of the car cruise.

So many thoughts went through my mind as I saw various cars pass by. When I saw an old Ford pickup go by, it reminded me of my dad who bought nothing but Ford pickups and the one I saw reminded me of one of his. Then I saw a newer Ford pickup and thought of my daughter who through genetics inherited that same love of the Ford truck.

Then I saw what reminded me of a Ford Galaxie like one that we had, for just a short time. It had come to our family complete with the police engine in it and my dad being so proud of that car...until he wrecked it. Somewhere I have a photo of my helping my dad wash it when I was probably 2 or 3. Then along came a Mustang again reminding me of my daughter.

I saw a couple of my friends in their cars inherited from her father and remembered his funeral, but I also remembered how they won in some of the car shows later.

The lone Pacer reminded me as a kid of what a "Bubble" car would look like if someone would have called it that. My aunt and uncle came down to show us their new Pacer and I remembered thinking "that's an odd duck for a car. Then there were Pintos which was again another car I remembered from childhood. As I snapped picture after picture of the cars going by, I chuckled not knowing if I was snapping a photo of an old car, or a new car that someone wanted to show off or just someone going from one end of town to the other to get some milk.

Then a car drove by with flames on it which I assume was from the 50s and that again reminded me of my dad who had a car from that era with flames painted on it. I've never seen a picture of it, but I like to think it looked like that one only black. Then I saw a car that reminded me of the police cars in an old Bonnie and Clyde movie and just as I was finishing my thought the owner turned on the police siren belonging to the car.

Then things took a weird turn as I saw a hearse go by, but I had to chuckle at that. Then there was a car that looked like Doc in the Cars movie. And I really did bust out laughing as I'm looking through my lens and the camera focused on one of our sheriff's car coming through it, but I thought, why not, so I snapped them too.

But the thing that made me chuckle the most was being hollered at, or when people saw me taking pictures they'd rev their engine a little more and it hit me. Somehow when I take a LOT of pictures, I think I'm going to somehow relay how I feel, to you the readers by snapping, and snapping, and snapping. And I think the car revving might have felt by doing that it would also carry over into the picture or something. I mean it could be that they were just showing off what they could do.

The other thing I chuckled over was that I was seeing Camaros and Trans Ams going by and I remembered what it felt like in high school when I wanted one of those, but my budget only covered a Plymouth Valiant, which was nothing at all like a Camaro or a Trans Am.

As I snapped photos, I noticed that down the street there was smoke. Well, in this business, when there's smoke there's fire, but I noticed the smoke was only happening sporadically. So I made my way downtown where I saw that some of the cars were burning a little rubber to entertain bystanders.

I took photos of that, and then I got out my phone to shoot some video. While I'm doing this I'm thinking, "This is really, really dumb. If one of those cars loses control they are headed right at me. So I snapped photos of one, and took video of one and didn't tempt fate any longer. https://fb.watch/7-gIypEZ-A/

I suppose if there were any guys with an interest in cars and they were writing this article, they would have taken these photos, and gone in a completely different direction. They would have launched into something that went something like, "We saw a '54 Chevy with a 6 cylinder 235.5 front mount..." and that's where my eyes would glaze over. Or they might comment on the really wide tires on some of the cars and very tiny ones on another.

For me, I just enjoyed the drive down memory lane courtesy of all of the cruising drivers, thanks!

Clay McBride September 13, 2021, 1:48 pm The car with the flames is a 1949 Ford Coupe. It started out life as a police car (not driven by Barney Fife in Mayburry, North Carolina, but it sure could have been). It spent some time on the drag strip and eventually moved to eastern Iowa over 20 years ago. Since then, she has actually turned into a bit of a Frankenstein car. She has a small block Chevy out of a 1970 Monte Carlo, the chassis is from an early 80’s Monte Carlo, and the transmission and speedometer are from Corvettes. A custom labor of love. It’s the first car my dad ever bought me and I hope I can continue making memories with her for decades to come. Editor's note: She's a beauty!
Tom Van Eschen September 13, 2021, 7:41 pm How about the 1978 Toyota Land Cruiser. It was the only land cruiser in the cruise
advertiser content